Spermatogenesis (formation of spermatozoa) is a process by which the male germ cells are transformed into spermatozoa. Spermatogenesis occurs in the seminiferous tubules during active sexual life, under the stimulatory effects of the anterior pituitary gonadotropic hormones. It begins at an average age of 13 years and continues throughout the remainder of life but decreases markedly in old age.

The process of spermatogenesis is divided into 2 phases:

At the end of spermiogenesis, the mature sperm is formed of head, neck, and tail and surrounded by the cell membrane. 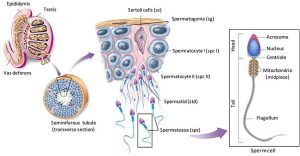 1. Middle piece: extends from the neck to the annulus (a ring-like dense material at the cell membrane, found at the end of the middle piece). It consists of:

2. Principal piece: extends from the annulus to the end piece. It consists of

3. End piece: it consists of the axoneme covered by the flagellar membrane (sperm cell membrane).

I. FSH: FSH stimulates spermatogenesis and Sertoli cell function. It also maintains a high concentration of testosterone in the seminiferous tubular fluid by:

B- Testosterone: it is secreted from the Leydig cells under the effect of LH and it reaches the seminiferous tubules directly where it is maintained at a high concentration by the effect of the ABP. It is essential for the division of the germinal cells. It stimulates the meiotic division of the primary spermatocyte to form a secondary spermatocyte. It is also essential for the maturation phase of spermatogenesis particularly spermatid maturation in the Sertoli cell.

Spermatogenesis requires a lower temperature than that of the body (optimally 32-33 °C). Rise of the testicular temperature e g. due to cryptorchidism, fevers, or continuous wearing of tight pants, damages the germinal epithelium (thus inhibiting spermatogenesis) and may kill any preformed sperms resulting in infertility.

Spermatogenesis is also depressed at lower temperatures than 32 °C. For this reason, the dartos muscle contracts in cold weather to draw the testes upwards (in order to be warmed by the abdominal temperature).

Failure of descent of the testes into the scrotum is known as cryptorchidism, this will maintain the testis at 37°C which damages the germinal epithelium and disturbs spermatogenesis leading to sterility. However, the interstitial cells of Leydig are not affected by high temperatures, so they secrete testosterone normally (thus the male secondary sex characteristics will appear normally at puberty)

A balanced diet containing adequate amounts of proteins and vitamins (especially vitamins A, E, C and B ) is necessary for normal spermatogenesis.

Endocrinal functions of the testes

The testes secrete several male sex hormones, which are collectively called androgens, including testosterone, dihydrotestosterone, and androstenedione, Testosterone is much more abundant and potent than the other.

It is a highly coiled tube, that lies on the posterior border of the testis.

Parts of the epididymis

Sinus of epididymis: It is a recess of tunica vaginalis, which lies between the testis and the lateral side of the body of the epididymis.

How to know the side of the testis: right or left?

Histological structure of the epididymis

The tubuli recti enter the mediastinum testis and form the anastomosing channels of the rete testis. Vas efferentia arise from the rete testis and unite to transport the spermatozoa into the single epididymal duct. The epididymis is surrounded by a fibrous CT capsule, tunica albuginea. In histological sections, epididymis appears as multiple oval cut sections with sperms in their lumina. The epididymal duct is lined by pseudostratified columnar epithelium formed of 2 types of cells.

The epithelium is supported by vascular connective tissue, the lamina propria, and is surrounded by a few layers of smooth muscle fibers which increase towards the tail region.

Functions of the epididymis

1. Storage of sperms: where absorption of excess fluid and removal of residual bodies, not removed earlier by Sertoli cells, occur. Epididymal sperms are expelled during ejaculation.

2. Maturation of sperms in epididymis: