Capillaries are the smallest blood vessels in the body, they convey blood between the arterioles and venules. The capillaries contain only 5% of the circulatory blood, but this fraction is the most important part of the blood volume because the exchange across the capillary wall is essential for the survival of the tissues.

Flow of blood in the capillaries – Vasomotion

The concentration of oxygen in the tissues is the most important factor which affects the degree of opening & closing of the metarterioles and precapillary sphincters, When the rate of oxygen usage is great so that the tissue oxygen decreases, the intermittent periods of blood flow occur more often, and the duration of each period of flow lasts longer, allowing blood to carry increased quantities of oxygen (as well as other nutrients) to the tissues (metabolic autoregulation of blood flow).

At any moment about 80% of the total capillaries in the body are completely closed and the open capillaries are not fully dilated. Capillary tone refers to the number of partially and totally closed capillaries. If all capillaries are to be open at any one time e.g. in burns or excessive histamine release, the vascular capacity will far exceed the blood volume leading to a marked drop in venous return, cardiac output, and arterial BP i.e. circulatory shock.

Fluid in the interstitium has almost the same constituents as plasma except for much lower proteins, as they don’t pass through the pores with ease. Diffusion, bulk flow, and vesicular transport are responsible for the exchange of materials across the capillary walls.

The diffusion is quantitatively much more important in terms of the exchange of the nutrients and waste material between blood and tissue than other methods of exchange. However, the net transfer of fluid across the capillary endothelium is mainly attributable to filtration and reabsorption (bulk flow).

Bulk flow across the capillary wall

Net shifts of the fluid between the capillary & interstitial compartments are important for many physiological functions including the maintenance of circulating blood volume, tissue fluid formation, interstitial fluid absorption, and urine production, Net fluid movement out of the capillaries is referred to as filtration, and fluid movement into capillaries is called reabsorption.

The rate of fluid movement at any point along a capillary depends upon a balance of forces (Starling forces), Four primary forces determine whether fluid will move out of the capillary into the interstitial space or in the opposite direction:

Analysis of forces at the arteriolar end:

Analysis of forces at the venular end:

Normally, the fluid filtered at the arterial end slightly exceeds the fluid reabsorbed at the venous end. The small excess is returned back to the circulation by the lymph vessels. The balance of Starling forces in some organs, however, is different. For example, the fluid moves out of almost the entire length of the capillaries in the renal glomeruli, On the other hand, fluid moves into the capillaries through almost their length in the intestines.

Normally, it has been estimated that about 24 liters of fluid are filtered through the capillaries per day. About 85-90% of the filtered fluid is reabsorbed into the capillaries, and the remainder returns to the circulation via the lymphatics. This lymph carries the albumin that escaped from the microcirculation. 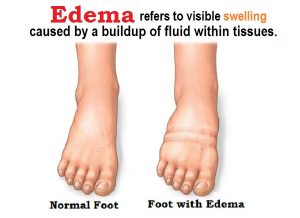 Definition: Edema is the accumulation of interstitial fluid in abnormally large amounts.

When capillary pressure is increased, more fluid is filtered through the capillary wall. This occurs as a result of increased venous pressure such as in:

Salt and water retention: whenever there is an abnormal retention of salt in the body, water is also retained content.