The small intestine, is a part of the gut, extending from the pyloric end of the stomach to the beginning of the large intestine at the ilio coecol junction. Its length is about 6 meters.

Duodenum is the shortest, widest, and most fixed part of the small intestine. 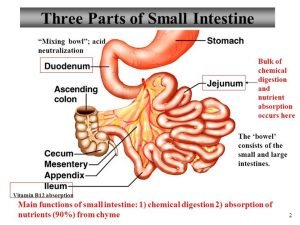 Parts of the duodenum

It is two inches long, its 1st inch is mobile because it is to rally covered by peritoneum. (Surface anatomy) it begins at the pylorus, 1/2 an inch to the right of the median plane at the level of L1 (transpyloric plane).

It is three inches long and descends vertically from the level of L1 to the level of L3. This part is only covered by the peritoneum anteriorly.

It is four inches long and lies horizontally opposite to the level of L3.

The duodenojejunal flexure is fixed by the Treitz ligament to the crus of the diaphragm.

Arterial supply of the duodenum

The veins follow arteries and end in the portal circulation

Lymphatic drainage: into the coeliac and superior mesenteric lymph nodes.

Arterial supply of the alimentary canal

When the disposition of the peritoneum in the adult is clear, the course of the three ventral branches of the aorta to the gut can be followed simply. They are distributed subsequently to the foregut, midgut, and foregut.

It is the artery of the foregut, and it divides into three branches which supply the alimentary canal down to the opening of bile duct, and liver, spleen and pancreas. It arises from the front of the aorta opposite the upper part of the body of the first lumbar vertebra. It is a short wide trunk, The semilunar sympathetic (coeliac) ganglia lie on each side of the artery and send nerves to the artery which are carried along all its branches.

It appears at the upper border of the pancreas and divides immediately into its three branches:

b) Splenic artery: It runs above the pancreas then it turns forward in the lieno-renal ligament to the hilum of the spleen, Here it breaks up into four or five short branches to the splenic substance.

c) Hepatic artery: It turns forward at the opening into the lesser sac and curves upwards between the two layers of lesser omentum at its free edge, Here it meets the common bile duct and lies on its left side, both in front of the portal vein.

Arterial supply of the midgut

The artery of the midgut is the superior mesenteric, which supplies the gut from the entrance of hepato pancreatic duct to a point just short of the splenic flexure of the colon.

Position and relations: It arises from the front of the aorta at the level of the lower border of the body of the first lumbar vertebra, It is directed downwards behind the neck of the pancreas, With the superior mesenteric vein on its right side then it lies in the groove between the neck and the uncinate process of the pancreas, The two vessels then pass over the third part of the duodenum and enter the upper end of the mesentery of the small intestine, They pass down to the right along the root of the mesentery and end at the ileum 2 feet proximal to the caecum.

2- Jejunal and ileal arteries: They arise from the left of the main trunk and pass between the two layers of the mesentery, They join each other in a series of anastomosing loops which form arterial arcades, From the arcades, straight arteries pass to the mesenteric border of the jejunum and ileum.

3- Ileo-colic artery: It arises from the right side of the superior mesenteric trunk low down in the base of the mesentery, It runs to the ileo-colic junction, where it gives:

4- Right colic artery: It arises in the root of the mesentery from the right side of the superior mesenteric artery, It divides near the left side of the ascending colon into two branches:

It arises from the front of the aorta at the inferior border of the third part of the duodenum opposite the third lumbar vertebra, It runs obliquely down to the pelvic brim, At the pelvic brim, it continues along the pelvic wall in the medial limb of the pelvic mesocolon as the superior rectal artery.

1- Left colic artery: It passes up to the left towards the splenic flexure. It divides into two branches.

2- Sigmoid arteries: They pass forwards between the layers of the pelvic mesocolon, in which they form anastomosing loops from which vessels sink into the wall of the pelvic colon.

Branches of the superior and inferior mesenteric arteries (right, middle and left colic arteries from a continuous artery along the inner side of the colon called the marginal artery.