It consists of the central part (body) and 3 horns; anterior, posterior, and inferior. Each lateral ventricle communicates medially with the 3rd ventricle through the interventricular foramen of Monro which lies at the junction between the body and the anterior horn of the lateral ventricle.

It lies within the frontal lobe. It is limited anteriorly by the genu of the corpus callosum. It is continuous with the central part posteriorly at the interventricular foramen. It is related to:

Central part: it extends from the interventricular foramen till the splenium of the corpus callosum. It is related to:

Posterior horn: it lies within the occipital lobe. It is related to the Tapetum of the corpus callosum and optic radiation laterally.

Inferior horn: it lies within the temporal lobe. It is the largest of the 3 horns. It is related to: 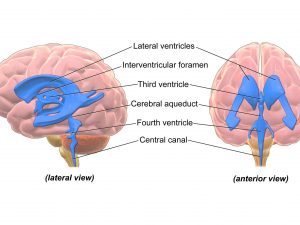 Ventricular system of the brain

Communications of the third ventricle

The third ventricle has a roof, floor, 2 lateral walls, anterior wall, and posterior wall. The floor is formed by (from anterior to posterior):

Lateral wall is related to:

It is a tent-like cavity of the hindbrain. It lies between the pons & medulla anteriorly and the cerebellum posteriorly

Boundaries of the 4 ventricles

Floor: It is rhomboidal in shape called homboid fossa. It is formed by the dorsal surface of the pons and medulla. Thus the floor of the fourth ventricle is divided into pontine and medullary parts separated by the stria medullaris. It communicates with:

CSF is a clear transparent fluid that fills all the cavities inside the brain ventricles and surrounding subarachnoid space.

Communications inside the ventricular system:

It is space lies between the arachnoid and the pia maters.

Formation of the CSF: formed by the choroid plexuses of the lateral, 3rd and 4 ventricles.

Pathway of the CSF