Samsung Galaxy A7 (2016) supports a Super AMOLED capacitive touchscreen, 16M colors, Its size is 5.5 inches (~74.3% screen-to-body ratio), It brings a resolution of 1080 x 1920 pixels (~401 ppi pixel density), It presents a multitouch feature, and it comes with Corning Gorilla Glass 4 for protection. 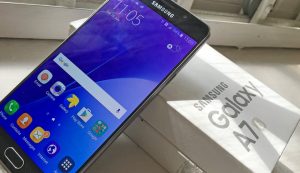 Samsung Galaxy A7 (2016) includes a photo/video editor, It presents a document viewer, It supports a non-removable Li-Ion 3300 mAh battery, It comes with misc colors such as gold, pink, white, black, and it offers superb performance.

Samsung Galaxy A7 (2016) display is protected with the latest version of Gorilla Glass from Corning, It is very slim which is 7.3 mm only, It has a large 3300 mAh battery capacity, It comes with the fast battery charging technology, and it comes with the fingerprint sensor for security.

Samsung Galaxy A7 (2016) does not support MHL Out, SAR value or radiation factor is very high, It comes with a heavyweight (172 g), It does not support 4G in India (Band 40), It does not offer a Barometer, it does not bring a Temperature sensor, It is pricey for the hardware offered, and it has no 2160p video capture or high frame-rate modes.