Any metal contains positive ions & free electrons which can move around inside the metal but can not leave it due to the attractive forces of the surface which may be represented by a surface potential barrier, Some of these electrons can escape if given enough energy in the form of heat and overcome the forces of attraction at the surface.

This is the idea behind the cathode ray (CRT) which is used in TV, computer monitors and photoelectric cell, the surface potential barrier is the attractive force which attracts the electrons from inside & prevents them from liberating from the metal surface.

Cathode ray tube is used in television and computer monitors, It depends on the emission of the electrons from the surface of metal at heating (Thermoelectric effect). 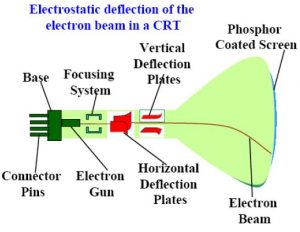 The tube consists of a metal surface called the cathode, The cathode is heated by a filament, electrons are emitted from the electron gun (E – gun), due to heat, some electrons may overcome the forces of attraction at the surface (surface potential barrier).

These electrons are liberated from the metal and then picked up by the screen, which is connected to a positive pole called anode, thus causing current in the external circuit, When the electrons hit the screen, they emit light which varies in intensity from point to point on the fluorescent screen, depending on the intensity of the electrical signal transmitted.

The energy (Joule) = Energy in electron Volt × Charge of the electron

The intensity of the electron beam can be controlled by using a grid in the way of the electrons as well as using magnetic and electric fields (plates X, Y) to direct the bundle of electrons to sweep the screen point by point generating the picture, so, called raster until the frame is completed.

It is used to convert the light energy into electric energy as in the calculators, opening and closing the doors and some instructions, It depends on the emission of electrons due to falling of light on a metallic surface (photoelectric effect).

Einstein put an interpretation for all of this, which led him to Nobel prize in Physics in 1921, He explained the photoelectric phenomenon as follows: A certain amount of energy is needed to liberate the surface electrons called the work function (Ew).

For every metal there is a work function (Ew), if the falling photon has the energy (h ν) which is less than the work function (Ew) of the metallic surface, the electron would not be emitted at all no matter how intense the light might be and the emission is instantaneous.

If the falling photon has the energy (h ν) which is equal to the work function (Ew) of the metallic surface, the electron will be barely set free without any energy in this case, the frequency of the photon is equal to the critical frequency (νc).

If the falling photon has the energy (hν) which is greater than the work function (Ew) of the metallic surface, the electron will set free and the energy difference (h ν − Ew) is carried by the electrons as kinetic energy and it moves faster.

The critical frequency of a metal (νc) is the minimum frequency of light falling on a metallic surface to liberate the electron without gaining kinetic energy.

The photoelectric phenomenon is the emission of electrons from a metallic surface due to the falling of light with suitable frequency.

The factors affecting the work function (Ew) of a metallic surface:

The relation between photocurrent and light intensity

If the frequency of the incident photon is less than the critical frequency of a surface, the photocurrent will not be emitted even if the light intensity or the time of falling of light increased, ν < νc.

The relation between the kinetic energy of the emitted electrons from a metal surface and the frequency of the incident light:

h ν = h νc + ½ mv²,  This is Einstein’s equation for the photoelectric phenomenon.