Quantum physics is the physics that allows us to study and explain scientific phenomena which might not be directly observed in our daily life especially when we deal with atomic and subatomic systems such as studying atomic spectrum and electronic phenomena on the level of the molecule such as studying chemical reactions.

The classical physics explains everything in our daily life and our common experiences, but there is another branch which deals with a great collection of scientific phenomena which might not be directly observed in our daily life.

Quantum physics explains all phenomena involved in electronics which is the basic for all the modern electronic and communication systems.

Quantum physics explains the chemical reactions on the level of the molecule which were photographed by Ahmed Zewail using a high-speed laser camera and such work entitled him to be awarded the Nobel Prize in Chemistry in 1999.

Quantum physics deals with a number of situations in the universe which classical physics can’t explain, especially when we deal with atomic and subatomic systems down to the subatomic scale.

Classical physics is the physics that allows us to interpret the daily observations and common experiences such as studying waves as sound, light, heat & electricity with their properties.

The blackbody is a body which does not exist in nature but it can be likened as enclosed cavity which has a small hole, the inside of the cavity appears black because all of the radiation within the cavity remains trapped due to multiple reflections and the larger part of the radiation is absorbed while only a small part of it leaks out which is called ” Blackbody radiations “.

A blackbody is a body absorbs all the radiations with different wavelengths which fall on it (perfect absorber) and emits these radiations wholly (perfect emitter). 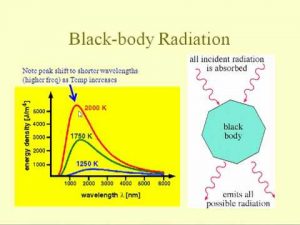 Planck managed to explain the relation between the intensity of radiations and the wavelength by studying the emitted radiation from different sources, The graphical curve representing this relation is called Planck’s curve.

Planck’s curve is a curve which represents the graphical relation between the intensity of the radiations and the wavelength of the emitted spectrum.

The description of Planck’s curve:

The temperature at the surface of the Sun (T = 6000 K) and this makes the maximum intensity of radiations (the peak of the curve) lies in the visible spectrum, thus, the wavelength at peak (λm = 0.5 μm = 500 nm), which is within the visible range, thus, almost 40 % of the total energy emitted by the Sun is in the visible range and almost 50% is heat (infrared radiation), while the rest is distributed over the remaining spectrum.

The temperature of the Earth is far less than that of the Sun as the Earth is forming non-glowing bodies which absorb the radiation from the Sun and remits it, So, the maximum intensity of the radiation lies within the infrared region at a wavelength (λm = 10 μm = 10000 nm).

Wien’s law: The wavelength (λm) accompanying the maximum intensity of radiation is inversely proportional to Kelvin temperature of the glowing source.

We can explain the bell shape of radiation, Planck could explain the blackbody radiation phenomenon by postulating some assumptions as follows:

Importance of studying the emitted ray from different bodies

In military purposes, night vision systems are used for detection and imaging moving objects in the dark due to heat radiation which these objects emit, In criminology as the heat radiation for a person stay for a while even after the person has left which is called remote sensing, The thermal imaging used in medicine, particularly in tomography (tumor detection) in embryology.

The oscillating circuit, Tuning or resonant circuit in the wireless radio receivers