Industrial robot is designed to perform repetitive tasks, It is an automatically controlled, programmable, multipurpose manipulator & capable of movement on three or more axes, It can assist in material handling, It is used in welding, painting, assembly, pick & place, for printed circuit boards, packaging & labeling, palletizing, product inspection, and testing.

The industrial robot consists of a manipulator arm, The robot comes with a different joint configuration, the joints in the arm are called the axes, It includes systems like Amazon’s warehouse robots & collaborative factory robots that can operate alongside human workers, They offer high endurance, speed, and precision

An articulated robot is used in many applications such as material handling, dispensing, assembly operations, diecasting, fettling machines, gas welding, arc welding & spray painting, It comes with rotary joints, it can range from simple two joint structures to 10 or more joints, The arm is connected to the base with the twisting joint, The links in the arm are connected by rotary joints, Each joint is called the axis & it offers an additional degree of freedom or range of motion.

It is suited for industrial work unlike most other types of robots, due to its extra axes, It is also known as the anthropomorphic robot, the industrial robots commonly have four or six axes, the actuators are directly coupled through a set of rotary gear or belt elements, Articulated robot is easy to fabricate and maintain, since it is designed to achieve rotary motion, achieving linear motion requires complex mathematical calculations. 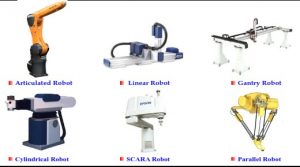 Cartesian robots are also called rectilinear or gantry robots, They have three linear joints that use the Cartesian coordinate system (X, Y, and Z), They have an attached wrist to allow for rotational movement, The three prismatic joints can deliver a linear motion along the axis.

They have three axes which are linear, they can move in straight lines rather than rotating & they are mounted at right angles to each other, They can do 3 translations using linear slides, The mechanical arrangement of Cartesian robots is far simpler than most of the other stationary robots, It is used for pick and place work, application of sealant, assembly operations, handling machine tools and arc welding.

Cartesian robot needs a large volume to operate & has a rigid structure, The set of rotary motors coupled with nut & ball screws make it possible to achieve rectilinear motion, on frequent maintenance of these screws, the robots will be more expensive.

Cartesian robot is the most common robot used for both industrial & commercial purposes, Plant operators use this type because they are easy to use & program, Cartesian robot comes with linear movements that provide the robot with a cube-shaped workspace that fits best with pick-and-place applications & can range from 100 millimeters to tens of meters.

It is a popular choice because it is highly customizable, Customers can determine the stroke lengths, speed and precision of the robots because most of the parts arrive separately & they are assembled by the machine builders, one disadvantage of Cartesian robot is the complexity of assembly required, plant operators choose this robot design most often for the flexibility in its configuration that allows it to meet specific application needs.

Cylindrical robot can operate within a cylindrical-shaped work envelope, It is very simple & similar to Cartesian in its axis of motion, it has three axes of movements, It is made of two moving elements which are rotary & linear actuators so, Arms of the robot move in one angular & two linear directions, Installation & use are not complex.

The cylindrical robot is a robot whose axes form a cylindrical coordinate system, So, machine designers can select it for its economy of space, these cylindrical robots are mistakenly regarded as SCARA robots or vice versa which is erroneous, their work envelope is almost similar, both their structures and field of application are poles apart.

Cylindrical robot has basic rotation, elevation and reach, Unlike Cartesian robots, these robots require less volume, These are used in applications where the requirement is to reach into small openings or working on cylindrical surfaces like welding pipes, They are used for assembly operations, spot welding, handling at machine tools & machine die castings.

Polar robots are called spherical robots, the arm is connected to the base with a twisting joint and a combination of two rotary joints & one linear joint, The axes can form a polar coordinate system & create a spherical-shaped work envelope, Spherical robots arms move in two angular & one linear direction, It has a base rotation, angular elevation and reach.

They are in between Cartesian or Cylindrical robots and those ultra sophisticated articulated robots, a mobile spherical robot is a mid-sized robot inside a spherical ball, which moves with the help of IDU (Internal Driving Unit), They are used for handling at machine tools, spot welding, die-casting, fettling machines, gas welding, and arc welding, They are extremely efficient in surveillance & monitoring missions and they can be used underwater.

SCARA robot (Selective Compliance Robotic Assembly Arm /Articulated Robot Arm) is a selectively compliant arm, Compliance refers to the flexible behavior of the robot in response to external forces, SCARA robot is primarily cylindrical in design, It comes with two parallel joints that offer compliance in one selected plane, It can do 3 translations plus a rotation around a vertical axis, It is used in many applications such as assembly, packaging, sorting & light-duty drilling.

SCARA Robots have the serial architecture, where one base motor has to carry all the other installed motors, One of the disadvantages of SCARA Robots is that they are extremely expensive compared to rather inexpensive Cartesian robots and the fact that they need high-level & complex software to operate.

SCARA is used for assembly purposes all over the world due to its easy & unobstructed mounting, It is used for pick and place work, application of sealant and handling machine tools, It offers a more complete solution than the Cartesian or Cylindrical robot, It is an all-in-one robot, It is equipped with x, y, z & rotary motion in one package that comes with ready-to-go, and it offers the end-of-arm tooling, The work envelope is similar to Cylindrical robots but it has more degrees of motion in a radius or arch-shaped space.

The applications of SCARA robots are similar to Cylindrical and Cartesian robots, but SCARA robots can move quicker than the other two, They are seen in Biomed applications due to their small work area, SCARA robots have the easiest integration, so, they seem like the best solution for the majority of applications, but Cartesians are more common because of their level of customization.

Delta robot configuration is capable of delicate, precise movement, it is called spider-like robots, It is built from jointed parallelograms connected to a common base, The parallelograms move a single EOAT in a dome-shaped work area, They are used in the food, pharmaceutical & the electronic industries, The main benefit of Delta robots is their speed & precision with which they operate.

Delta robots are the fastest & most expensive, They come with a unique, dome-shaped work envelope in which they can achieve very high speeds, They are used for fast pick-and-place or product transfer applications like moving parts from a conveyor belt and placing them in boxes or onto another conveyor belt, They come as complete solutions for machine designers but they are more complicated in use than 6-Axis robots or SCARA robots.

The 6-Axis robot is another all-in-one robot type, Although 6-Axis robots can be almost toy-sized, they are very large & they used for large assembly jobs such as putting seats into a car on an assembly line, They operate like a human arm and can pick up materials and move them from one place to another, An example of this would be picking a part up from a table top & putting it into a cupboard, where the other robot types cannot do easily.

They can move quickly and come in complete solutions like SCARA robots, their programming is more complicated, most designers choose them due to their ability to make movements that others can’t compensate for the loss of space, They feature six axes of motion (6 degrees of freedom), This design allows maximum flexibility, Six-axis robots are ideal for Arc Welding, they can fully position their tool in a given position (3 translations) & orientation (3 orientations).

Parallel robots are called Parallel manipulators, parallel means that the end point of each individual linkages is completely different from others, where a bunch of machines controlled robotic chains supports the end effector or simply end platform, such as flight simulators, which are used by military and commercial pilots to enhance their flight abilities by simulating real-life situations.

The parallel industrial robot is a robot whose arms have concurrent prismatic or rotary joints, It is used a mobile platform handling cockpit flight simulators, it can remain rigid & resist all the unwanted disturbances & movements, which is contrary to serial manipulator robots, Even though each actuator works with a degree of freedom, their flexibility is constrained by the other actuators, this rigidity and stiffness that separate parallel manipulators from serial chain robots.

They come in many forms, Some are called spider robots, Parallel robots are made in such a way that you can close loops from the base to the tool and back to the base again, It is like many arms working together with the robot tool, Parallel robots come with a smaller workspace but higher accelerations, the actuators don’t need to be moved.