Cobots are cost-effective, flexible, safe & user-friendly collaborative robots that work closely with the people in production environments, They are making automation easier than ever before for small & medium-sized businesses, Cobot is the future of the automation industry, It is a programmable machine which physically interacts with the world around it, it can carry out a complex series of actions autonomously or semi-autonomously.

Collaborative robots are called cobots, they are redefining the human-robot relationships across the manufacturing industry, They are used in many industrial applications such as assembly, loading/unloading, packaging, sorting, dispensing, sanding, and polishing, They have evolved to become more independent and sophisticated machines that not only share the workspace but are genuinely work partners with human beings.

Collaborative robots will not affect jobs, They are not designed to replace humans but rather to carry out tasks that are deemed harmful or impossible for humans to do, They can perform intricate tasks that require a lot of dexterity & cause repetitive stress injury in humans, They can perform heavy lifting duties or handle harmful toxic substances or extremely hot components, They are designed to work with humans so, they integrate into the production process and enhance it. 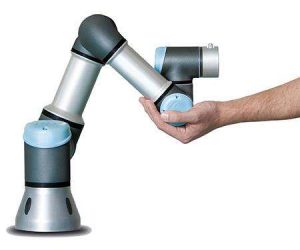 Collaborative technology will increase productivity & reduce labor costs, Collaborating robots can coexist with human beings sharing the same work area, They are easy in programming & integration, In less than a year, you can get back the money invested in the robot, The person walks up to the robot, touches the robotic arm, and the arm follows drawing lines on the screen, What used to be dangerous for humans is now made safe & accessible.

Collaborative cobots are a great investment for a manufacturing facility, they can be easily re-programmed and moved to a new location if the tasks they were originally assigned to change, This makes them not only accurate, safe and cheap but also flexible.

The collaborative robots don’t need a segregated work cell, They monitor the current draw on their motors or have embedded sensors that can tell if the robot has come in contact with another object it wasn’t expecting (like a person), and the robot stops, This additional safety measure allows the robots and people to work alongside each other.

The collaborative robot can make a single worker much more efficient or can replace a worker’s repetitive task in a small area where a traditional robot’s extra infrastructure won’t fit, the collaborative robot offers a less expensive implementation cost than traditional industrial robots due to the need for expensive safety equipment being removed.

Collaborative robots are less expensive than the six-axis robot, They come with software that allows someone to reprogram the machine by physically moving it around to its task points, So the collaborative robot can be moved to a new job and perform a new task, Cobots operate at a speed akin to humans and they have a short human-like reach, They require a lot of documentation including safety certification so that they are suitable for human interaction.

Collaborative robots offer flexibility, they have the ability to work safely outside of a dedicated work cell means that people can augment the robot’s work (and vice versa), allowing the operations to realize higher productivity without either additional labor or extensive capital investment.

The cobot can move parts in and out without affecting the over cycle time of the process while reducing the cost and increasing the accuracy for small parts assembly (small electronics) that doesn’t require blazing speed, The cobot can add efficiency to an operation and it can assist the workers in a complex assembly process.

The typical application may involve the robot doing basic movements while its human counterpart completes a complex inspection or difficult manipulation, The collaborative robot saves the worker time by doing the easy portion of the job, allowing the worker to apply their skills a higher percentage of the time instead of just moving pieces around.

The collaborative robot can free workers up to perform more meaningful tasks, cobots follow packing guidelines & never overstuffing boxes or under-packing dunnage, They are moving from behind fixed and caged locations to workstations alongside human workers, not to mention moving from heavy-duty industrial applications to actions like providing assistance and augmenting skills.

Collaborative robots can be integrated with vision systems, Whether they’ll be doing a basic inspection of a part or using the vision system to pick parts out of a jumbled container, integrating a vision system allows the robot and its associated software to decide which part is the most accessible & adjust its manipulation to grab it.

Not only do collaborative sensing robots work side-by-side with a human counterpart, but they’re able to complete complicated and dangerous tasks that traditional robots or humans simply can’t, Applications like steadying the motion of surgical tools or lab operations to prevent human error from causing unwanted motion are at the forefront of the collaborative robots industry.

The collaborative robot can share the workspace with humans, physical separation is not required, This is a break from past practice where robots had to be caged to avoid harming anyone who got in their way, with the change of sensor and robot controller technology, The robot can reliably detect and adapt to intrusion into its work envelope, meaning physical barriers are no longer essential for safe operation.

Moving the cobot to new processes is fast and easy, giving you the ability to automate any manual task, including those with small batches or fast change-overs, The cobot can re-use programs for recurrent tasks, Unlike standard industrial robots that are designed to increase output efficiency by increasing speed and quality, cobots unique selling point is not their speed.

Collaborating robots may require a restricted working area to ensure employee’s safety, The initial cost of setting up the cobot’s cell can be substantial, Work speed can be hampered if there are safety measures put in place, the cobot robot may stop every time it senses the presence of a human being in its working environment.

Some collaborating robots are programmed to slow down when the person comes close and completely shut down when he is too close to cause safety concerns, costly measures may have to be put into place, Because robots are collaborative, they cannot work without human assistance and supervision.

Deploying the collaborative robot offers the elimination of the safety cage, This frees floor space and can lower the cost of implementing robotics, The non-collaborative robot used in the automated cell must be guarded to keep the operators outside, The guarding itself can be expensive, when gates, interlocks, and interfacing to the cell controller are included.

The cost of moving material in and out of the cell is overlooked, While simple roller conveyors might be inexpensive, belt & pallet systems can add to the cell’s cost, but with the collaborative robot, The operator can work alongside the automation, positioning the material or workpiece and removing finished pieces from the cell as needed.