Automation has been cost-effective without employing many workers, Tesla Motors has introduced the Tesla Bot which was created in response to the low employment rates of many manufacturing jobs, Tesla Bot is a conceptual robotic humanoid made for doing unsafe, repetitive, or boring tasks via AI, It can perform simple tasks such as carrying boxes and watering plants with a watering can.

What is the Tesla Bot?

Tesla Motors is an automotive company, It specializes in electric cars, The company’s CEO, Elon Musk, has introduced the Tesla Bot to the world, Any manufacturing company which needs a more cost-effective production line can use Tesla Bot, Tesla bots are a great way to take care of tedious tasks, and they can be an effective tool for some businesses.

Tesla Bot is also known as Optimus, It is a conceptual general-purpose robotic humanoid under development by Tesla, Inc, It was announced at the company’s Artificial Intelligence (AI) Day event on August 19, 2021, CEO Elon Musk claimed that Tesla would likely build a prototype by 2022.

Tesla CEO Elon Musk kicked off Tesla AI Day 2022 with a quick level set of expectations and stepped aside to allow the first iteration of its robot to walk out onto the stage. The robot wasn’t a human dressed in a robot costume like last year. Instead, Tesla introduced a functioning robot, albeit with exposed cables and a bit wobbly, at its second annual event, According to Musk, it was the first time it was working without “any support, cranes, mechanical mechanisms or cables.” 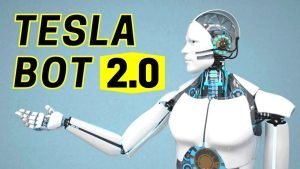 Tesla Bot envisions the next generation of automation, It eyes building a bipedal humanoid robot that can perform dangerous, repetitive, and boring tasks, Tesla Bots can relieve humans of unsafe duties by offering manufacturing assistance through automation in logistics, It will be a household robot, and it will aid millions of people, from picking up groceries to cooking and to caring for elderlies.

Advantages of using a Tesla robot

The Tesla Bot is a humanoid prototype, It can be used by any company that needs a more cost-effective production line, It is a robotic welding device, It does not put off any harmful fumes or noise, making it an environmentally friendly alternative to conventional welding techniques, Tesla Motors has introduced the Tesla Bot to keep up with this trend.

The Tesla robot can work by first taking pieces of metal and using its powerful robotic arm to weld them together, It does not need breaks or lunch breaks. It can work 24/7 if required, Tesla is tapping the hardware and software used in its advanced driver assistance system Autopilot for the bot as well, The Tesla robot is equipped with wireless connectivity, audio support, and hardware-level security features.

Tesla robot is an electromechanically actuated, autonomous bipedal “general purpose” humanoid robot. If the robot was produced in mass volumes it would probably cost less than $20,000, Tesla maintains that Optimus’ advantage over competitors will be its ability to navigate independently using technology developed from Tesla’s driver-assistance system “Full Self Driving”. and its humanoid design will allow it to adapt easier to human society.

Safety is very important, so, the Tesla Bot will have a localized chip available for remote updating, and to alleviate the fear of a dystopian situation, the Tesla Bot can comply when instructed to stop whatever activity it is doing.

Disadvantages of The Tesla robot

The Tesla Bot doesn’t have the same talent as a human worker, which means it can’t perform the same tasks as a human worker. Also, because this machine operates fast, if anything goes wrong with one of its moving parts, it could cause a long shutdown period for the entire production line. Tesla bots are missing a brain, they don’t have the intelligence to navigate the world by themselves.

The Tesla robot can’t do as much as a human welder, and the machine can’t match the versatility and speed of a human welder, It is confined to welding, and it can’t fix any problems that arise, so, companies need to hire humans for jobs that require more skills than welding and repairing, These tasks include set-up, packing, and quality control.

Another disadvantage is the upfront cost of purchasing the Tesla Bot. The price of the Tesla Bot ranges from $30,000-$40,000, which is a significant investment for most companies looking at automation options, The Tesla robots offer high productivity and low production costs that could make up for the initial expense over time, It is a developing project that is still with limited available specifications.

Musk said the first-gen prototype, which he referred to as Bumble C, will evolve into Optimus, This robot will be able to walk efficiently and stay balanced, carry a 20-pound bag, use tools, and have a precision grip for small robots, The Bumble C prototype is outfitted with 2.3-kilowatt-hour battery pack, which was “perfect for about a full day’s worth of work.”

Tesla showed off a second bot, which didn’t have the same functionality as the Bumble C but had an outwardly sleeker appearance, Tesla bot, which could not walk, was brought out on stage by staff. Some of the specs of the robot have changed, and the weight of the bot has moved up from 125 pounds to 160 pounds.

The brain of the Tesla bot is a Tesla AI chip, Hands are 11 degrees of freedom, and muscles are 28 structural actuators, Joints are inspired by biological human joints, Eyes are cameras, Ears are microphones, Voice is a speaker, Battery is 2.3kWh battery pack, 52V, Power consumption is 100 watts while sitting, 500 watts while walking, and speed is 5 MPH (8 kilometers/hour).

The Tesla bot has connectivity such as WiFi, and LTE, It can lift 150 lbs (68 kg) off the ground, its weight is 160 pounds (73 kilograms), and its carrying capacity is 45 pounds per hand (20 kilograms), likely more in different configurations, materials are metal where necessary but as much plastic as possible for weight savings, In terms of movement capability, the Tesla robotics team is aiming extremely high, with no fewer than 18 sometimes-complex movements.

The height of the Tesla Bot is 5 ft 8 in (173 cm), its arm extend lift is 10 lbs (4.5 kg), BOT Brain is TESLA SOC, The Tesla Bot will be controlled by the same AI system, proposed tasks for the product are “dangerous, repetitive and boring”, such as providing manufacturing assistance.

The Tesla Bot has a sleek shell design, It is built using lightweight materials, It will have 2 axis feet for balancing and feature force feedback sensing, Tesla Bot can carry similar tools as Tesla cars, such as autopilot cameras, screen displays, and self-driving computers, It will have eight autopilot cameras in the head for sensing the environment, The face will have an interactive screen allowing communication and information display, This info display will be a replacement for speaking.