Continuous tracks are also called caterpillar tracks or tank treads, They are vehicles that run on continuous tracks instead of wheels, they are a system of vehicle propulsion where a continuous band of treads is driven by two or more wheels, The band is made of rubber reinforced with steel wires in lighter agricultural & construction vehicles or it is made of modular steel plates in military vehicles.

Tracks robots are also known as threads, They are sets of linkages that are connected to drive gears, wheels, rollers or sprockets, allowing them to run a certain length along the robot‘s chassis in a similar manner to a conveyor belt, This helps them to pull the robot along when driving forwards or backward & turning sideways, Combat military tanks prefer using tracks over wheels, and they are expected to run on rough terrain.

Tracked robots can vary widely in design, usually being made out of metal or rubber, and featuring grooves, treads or screws built into them to provide traction along the arena floor, Tracks, particularly treads, are not to be confused with simple drive chains, that merely provide drive power by connecting the motor output shaft to a robot‘s wheels or gears. 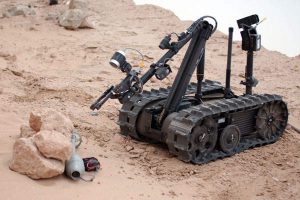 Tracks and sprockets are a great alternative to robot wheels, They are made from polypropylene/rubber tracks, they are perfect for rugged terrain, They are lightweight & reliable, The tracks are easy to assemble, Tracked vehicles are in contact with a larger surface area, so, they exert a much lower force per unit area on the ground being traversed than a conventional wheeled vehicle of the same weight, Tracked vehicles are suitable for use on soft, low friction and uneven ground such as mud, ice & snow.

Tracks can be used when the wheels can’t be used, including the move on uneven terrain or when it’s needed high traction, continuous tracks have high performance & optimized traction system, which is a plus in power delivery efficiency, the traction is high even on slippery surfaces like snow or wet concrete, The robot can operate on rough terrain while the wheels can get stuck, the continuous band of treads can ascend and descend stairs, surmount obstacles, or cross ditches.

Prominent treads of the metal plates are both hard-wearing & damage resistant, especially in comparison to rubber tires, The aggressive treads of tracks offer good traction in soft surfaces but they can damage paved surfaces, Special tracks which incorporate rubber pads can be installed for use on paved surfaces to prevent the damage that can be caused by all-metal tracks.

Continuous tracks are used on a variety of vehicles including bulldozers, excavators, tanks, and tractors, but they can be found on any vehicle used in an application that can benefit from the added traction, low ground pressure and durability inherent in continuous track propulsion systems.

The tracked robot uses Skid steer drive that is a modified concept of differential drive, It has two tracks attached at either side of the chassis driven by two separate motors, They are steered by moving those tracks at different speeds in the same/opposite direction, tracked robots skid to change their direction, This makes the threads/tracks to wear off quickly and they require larger area to turn as they slide their entire body against the ground.

Tracked robots present much more traction on the arena floor than wheels robots, offering better acceleration and making robots with them more capable of pushing opponents, Tracked robots can maintain contact with the arena floor at all times, enabling them to continue driving & steer away from opponents if they were lifted, Tracks can easily be compatible with invertible designs, Tracks can offer better balance than wheels as a result of their length and larger mass.

Tracks are much more fragile against spiked, overhead, spinning and crushing weapons, So, they can be dislodged, seized, punctured or torn apart completely, This vulnerability is further heightened if the tracks are not protected from the sides, where they can easily be damaged/dislodged and usually leave the robot immobilized on one side, Tracks can be caught on and/or damaged by arena hazards.

Tracked robots are more susceptible to driving up and being lifted by opponents as a result of their even higher ground clearance because they are custom-made, tracks robots are much more difficult to repair or replace than wheels if they become damaged during battles.

The robots with continuous tracks have lower speed compared with robots on wheels due to more friction and a complex mechanical system, Robots on tracks are less precise in maneuverability and require more power when turning, The continuous tracks can be easily broken or dislodged than wheels, Rubber tracks have a running time much smaller than the wheels.

Tracked robots control their orientation with differential steering method like four-wheeled robots, They have some drawbacks due to the tracking mechanism which is a high-cost unit, It is very complex & it needs regular maintenance which lowers operation time, Tracked vehicles have more complex mechanisms than wheeled vehicles, and they are relatively prone to failure modes such as snapped or derailed tracks.