Rescue robot is the robot that has been designed for the purpose of rescuing people, It is used in mining accidents, urban disasters, hostage situations, and explosions, It can access unreachable areas, It is being made with abilities such as searching, reconnaissance & mapping, removing or shoring up rubble, delivery of supplies, medical treatment, and evacuation of casualties.

Rescue robots are used to search for victims & survivors, They are very suitable to be used in disaster scenarios, Disasters rescue robots are sent into the rubble to look for survivors & bodies, If the robots have trouble during working in the rubble, Engineers and scientists will try to change the shapes of the robots to work without wheels.

Rescue robots are already being used around the world, these robots have only been sent to one earthquake before and that was in 2010 Haiti earthquake, The robot utilized there was called the “Seabotix ROV” and it looked for seawall damage, Rescue robots can carry out duties similar to human duties without the actual danger to human lives.

Mobile robots can keep soldiers safe in extreme conditions, The soldiers will not have to complete repetitive tasks or will not have to risk their lives in dangerous situations, Robots can rescue survivors in any event and they can also save soldiers who have fallen in battle, The rescue robots are excellent evidence for machine intelligence. 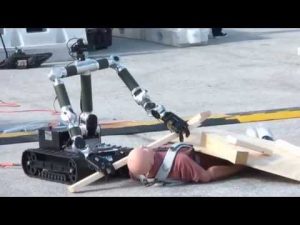 Rescue robots are programmed to make decisions by themselves accordingly to the situation, They are designed to help us during the situation of need, You don’t need to put human lives at risk, Robots can perform multiple actions at once, They are easily replaceable, They can be used in the aftermath of earthquakes, They are able to go in every direction and they can enter into small spaces.

Aerial rescue robot is specially designed for saving human lives, By developing its application, it can be used in ships & offshore reliefs, Fire fighting robot can automatically detect and extinguish the fire, It uses a flame sensor for detection & Arduino board for processing.

Medical robots are the robots used in medical sciences & they include surgical robots, Doctors use CozmoBot robot to enhance the therapy of developmentally disabled children between 5 and 12 years old, Hi-tech robots give more support to the doctors like robot carry plates, clean clinical wastes, dirty linen and cleaning operation theatre.

Military robots are autonomous robots or remote-controlled devices designed for military applications, several military robots have been developed by various armies, Marine rescue robots are underwater vehicles which play an important role in underwater rescuing, commercial offshore oil and gas exploration, subsea works, maintenance & inspection, Marine robots can go into combat situations to offer the assistance to soldiers, and they can give suppressive fire.

Using robots on the battlefield is very useful, They replace soldiers in dangerous missions such as crawling through caves or in street-to-street urban combat, They reduce civilian casualties if used properly and if sufficient ethical programming could be developed, They act as a force multiplier, One human fighter could command a squad of robots working semi-autonomously.

Robots can make faster decisions than humans, an important benefit on the modern battlefield, They can be unaffected by anger, revenge, hunger, fear, fatigue or stress, They can use video or other sensors to monitor human soldiers on both sides of a battle, They refuse to carry out an unethical or illegal commands, something the human soldier may be pressured not to do.

Robots increase the productivity, safety, efficiency, quality, and consistency of products, Robots can work in a hazardous environment, They need no environmental control, They work continuously without experiencing fatigue or problem, They can be much more accurate than the human, They can process many tasks simultaneously.

Robot can be used in various industries for picking various objects where human intervention is not desired, it can be used in military applications, It can be used to target the enemy without any human being crossing the territory, It is robust, sensitive and fast moving, So, it can be applied in the rescue operation.

Rescue robots don’t have personal requirements, Thay have some sensors that people control, so they can perform their tasks, They usually help people that are stuck in mines when they are in danger, They are designed to be small and versatile carrying a comprehensive sensor payload to detect victims, So, They can help people when they are in trouble.

Rescue robots save peoples lives on any platform, They are stronger to carry more people in a single run to save lives, They can be used anywhere when anyone needs help or in the medical field or in any rescue operation, They can do rescue jobs & search jobs, more people would get saved & they work faster than a human.

Rescue robots can help during natural disasters such as earthquakes, terror attacks, etc, They help save people without real people having to go & get themselves hurt, They may be altered to rescue more people in tougher environments such as Mine scouting rescue robots, Earthquake robots & in battle rescue robots.

Rescue robot is taught by pre-programmed motions set by the designer to tell it what to do in certain situations, Rescue robots have heat, motion, and visual sensors, They can detect dangerous heat, they can detect when an object moves, and they can transmit visual data back to the controller, Rescue robot can perform simple/extreme tasks, It can save someone while he is in danger, It can also handle hazardous materials.

Rescue robots cost too much, due to initial cost of equipment, installation cost, need for peripherals, need for training, need for programming, Rescue Robots need constant maintenance and need to have a power source to run, They lack the capability to respond in emergencies, They have limited of capabilities of sensors, vision system & real-time response.

Rescue robots are expensive to produce due to their increasing costs, So, only countries that are economically stable will be able to afford the expenses of developing and maintaining these rescue robots, Rescue robot mind does not function like the human brain, they are not able to sense danger as easily, and they might not work in all environments.