Telegram is open-source software, but its server-side code is closed-source & proprietary, Telegram apps are available for Android, iOS, Windows Phone, Windows NT, macOS & Linux, Messages & media in Telegram are encrypted when stored on its servers, the client-server communication is encrypted, You can send messages to other users individually or to groups of up to 100,000 members, Sent messages can be edited & deleted on both sides within 48 hours after they have been sent.

Telegram is a messaging & voice over-IP service, You can send messages & exchange photos, videos, stickers, audio and files of any type, It presents APIs to independent developers, It has over 200 million monthly active users, Messages & media in Telegram are encrypted when stored on its servers, and the client-server communication is encrypted, Telegram has end-to-end encryption for voice calls, and optional end-to-end encrypted secret chats between two online users, but not for groups or channels.

All contacts, messages & media together with their decryption keys are stored on its servers by default and by not enabling end-to-end encryption for messages by default, it helps to avoid third-party unsecured backups and to allow users to access messages & files from any device.

Telegram accounts are tied to telephone numbers & they are verified by SMS, You can set up an alias that allows you to send & receive messages without exposing your phone numbers, You can replace exact “last seen” timestamps with broader messages such as “last seen recently”, Telegram accounts can be deleted at any time, they are deleted automatically after six months of inactivity by default. 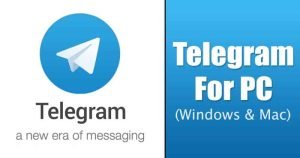 Telegram uses a default method of authentication for logins which is SMS-based single-factor authentication, All you need to log into an account & gain access to cloud-based messages is a one-time passcode that is sent via SMS to the phone number, These login SMS messages are known to have been intercepted in some countries, possibly in coordination with phone companies, Telegram users in “troubled countries” should enable two-factor authentication by creating passwords, which Telegram allows, but does not require.

Telegram has Cloud-based messages that can be accessed on any of the user’s connected devices, You can share photos, videos, audio messages and other files (up to 1.5 gigabytes in size per file), You can send messages to other users individually or to groups of up to 100,000 members, Sent messages can be edited & deleted on both sides within 48 hours after they have been sent, so, you can correct typos & retract messages that were sent by mistake.

Bots are Telegram accounts operated by programs, They respond to messages or mentions, they can be invited into groups and can be integrated into other programs, It accepts online payments with credit cards and Apple Pay, An invited bot can potentially read all group messages when the bot controller changes the access settings silently at a later point in time.

Telegram pointed out that it considered implementing a feature that would announce such a status change within the relevant group, there are inline bots, which can be used from any chat screen, In order to activate an inline bot, the user needs to type in the message field a bot’s username and query, The bot will present its content, You can choose from that content & send it within a chat.

Telegram added channels, Channels are a form of one-way messaging where admins can post messages but other users are not, You can create & subscribe to channels, The users who join a channel can see the entire message history, They can join & leave channels at any time.

Non-admin users can’t see other users who’ve subscribed to the channel, the users can mute a channel, so, the user will still receive messages, but won’t be notified, Admins can offer permission to post comments on the Telegram channel with help of bots, The admin of the channel can obtain general data about the channel.

Stickers are high-definition images, They offer more expressive emoji, When typing in an emoji, you can send the respective sticker instead, Telegram gives you one default sticker set, but you can install additional sticker sets provided by third-party contributors, Sticker images can use WebP file format, that is better optimized to be transmitted over the internet.

Telegram comes with Drafts that are unfinished messages synced across user devices, you can start typing a message on one device and continue on another, The draft will persist in editing area on any device until it is sent or removed.

Messages sent within secret chats can be deleted at any time & can optionally self-destruct, Secret chats have supported perfect forward secrecy, Encryption keys are periodically changed after a key has been used more than 100 times or has been in use for more than a week, Old encryption keys are destroyed, The users of Windows & Linux can’t use secret chats using the official Telegram Desktop app while the official macOS-only client supports them.

What are the advantages and disadvantages of the telegram?

The advantages and disadvantages of using WhatsApp