Bad effects of the webs of wireless transmitter of cellular phones

The networks have harmful effects on people who suffer from the heart diseases, they cause electromagnetic pollution, when people use the cell phones to make the calls, the signals are transmitted back and forth to the base station.

The RF waves produced at the base station are given off into the environment, where people can be exposed to them, the mobile phones use electromagnetic radiation in the microwave range and the digital wireless systems such as the data communication networks produce the similar radiation.

Cell phones communicate with nearby cell towers mainly through the radio frequency (RF) waves which are a form of energy in the electromagnetic spectrum between FM radio waves and the microwaves.

FM radio waves, the microwaves, the visible light, and the heat, they are forms of non-ionizing radiation, they cannot cause cancer by directly damaging DNA. 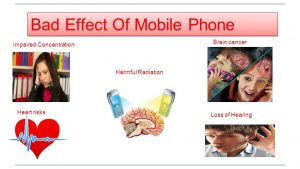 the cell phones use a very very low level of radiofrequency (RF) energy which is too low to cause the damage, and the type of energy emitted is non-ionizing, So, it doesn’t cause the damage to the chemical bonds or DNA.

RF waves are different from the stronger types of radiation such as x-rays, the gamma rays, and ultraviolet (UV) light which can break the chemical bonds in DNA.

At very high levels, RF waves can heat up the body tissues, (This is the basis for how the microwave ovens work) But the levels of energy used by the cell phones and the towers are much lower.

The cell phone users had an increased risk of malignant gliomas, the tumors are more likely to occur on the side of the head that the cell handset is used, one hour of cell phone use per day increases the tumor risk after ten years or more.

There is a link between the cell phone use and a higher rate of acoustic neuromas, the microwave phones can make the kids brain-impaired, The brain scans show that the microwave phone radiation penetrates deeply into the child’s brain.

The cell phone microwaves can open the blood-brain barrier allowing albumin and other chemicals from tiny blood vessels to leak into the sensitive brain tissues.

The leakage of the phone microwave radiation causes irreversible oxidative stress and the nerve tissue damage, the brain hormones, including the melatonin, the dopamine, the norepinephrine, and thyroid-stimulating hormone are disrupted.

The microwave phones highly elevate the child’s cancer risk, only 10 minutes on the cell phone triggers changes in the brain tissues linked to abnormal cell division and cancer, and the phone microwaves are implicated in both the eye and the salivary gland tumors.

The cell phones are dangerous as they emit the microwaves, they produce the heat, when people hold the source of emission close to their brain, they may have the brain tumors in the exact size, shape, and position as the antenna on their cell phone.

The advantages and disadvantages of mobile phones