What is Gyroscope?, Gyroscopes review, use, types, advantages & disadvantages

Gyroscopes are used in the inertial navigation systems of aircraft, ships, spacecraft & satellites, It is used for navigation & angular velocity measurement, It measures the rotational velocity of one, two or three direction axis, The 3-axis accelerometer is used to implement a 3-axis gyroscope, There are many types of gyroscopes such as Mechanical Gyroscope, Electronic gyroscope & MEMS gyroscope.

The gyroscope allows tracking of the twists, turns & rolls of the object in motion, Access to more accurate orientation information has wide-ranging practical applications, helping the land-based robot account for the obstacles it runs over, translating the person’s real-world movement into the virtual world, or helping to orient the aircraft in flight. 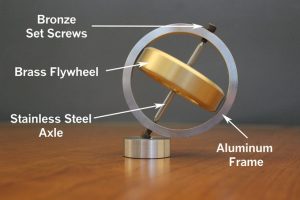 Gyroscopes can be used to assist in stability (bicycles, motorcycles, and ships) or can be used as part of the inertial guidance system, Gyroscope is used in many applications, It is used in military ordinance to provide backup in case an onboard GPS system fails, It is used in 3D game controllers, headsets, digital cameras, drones, automotive systems, etc.

The mechanical gyroscope is a simple wheel which is mounted on 2-3 gimbals (pivoted supports, typically rings, that allow the wheel to rotate on a single axis), A fiber optic gyroscope can use the interference of the light to detect the mechanical rotation, The two halves of the split beam travel in opposite directions in a coil of fiber optic cable as long as 5 km, it can use of the Sagnac effect like the ring laser gyroscope.

MEMS-Based Gyroscope (MEMS) is a significantly smaller form factor than other gyroscopes, It can be integrated with a digital interface in a single cost-effective package, It has lower power, It offers a significantly lower cost than FOG or RLG and therefore able to be used in mass-market consumer products.

MEMS gyroscope is extremely small and light in weight, Gyroscope sensor resolution depends largely on the spin rate of the roto, it is much higher than other force or tilt sensors, The compass of Gyroscope indicates true north as opposed to magnetic north, unlike magnetic compass, so, they are preferred sensors for high precision navigation systems.

Gyroscope is fast in operation, It measures relative orientation on all three axes, Gyroscope measures all types of rotation, but not a movement, It can measure angular velocity, Fiber Optic Gyroscopes (FOG) has extremely precise rotational rate information, It has no moving parts, It doesn’t rely on inertial resistance to movement, It typically shows higher resolution than RLG.

Ring Laser Gyroscopes is used in inertial navigation systems in military aircraft, commercial airliners, ships & spacecraft, It has a high performance, It offers high accuracy, better than 0.01°/hour bias uncertainty, MTBF (mean time between failures) greater than 60k hours, There are no mechanical or moving parts to create friction, so there is no drift.

Gyroscopes are a more expensive alternative to navigation and tilt sensing applications, Due to advancements in MEMS technology, MEMS versions of gyroscopes are available at lower costs, Free moving gyroscope depends on the rotation of the Earth, so, fast-moving objects moving on trajectory from the east to the west can’t use gyroscopes for navigation purpose.

Gyroscopes do not measure linear motion in any direction or any static angle of orientation, It is subjected to relative azimuth drift, unlike compass, Fiber Optic Gyroscopes (FOG) has longer production times due to higher calibration requirements, It can only be used for a single axis, to get multiple-axis information, multiple FOGs are needed.

MEMS-Based Gyroscope (MEMS) has less stability over temperature, humidity and stress, some of which can be compensated for software, It offers more integration error relative to FOG or RLG, It often has varied performance across lots of units.