The artificial vegetative reproduction by cutting in plants

Artificial reproduction (propagation) is the creation of new life by many natural means that available to an organism, The artificial insemination such as in the Vitro fertilization, the cloning, and the embryonic splitting, and the cleavage.

Cutting plants stems and placing them in the compost is also a form of artificial reproduction, where you can grow many plants from one plant by using the man-made methods, and it is called the artificial propagation of plants. 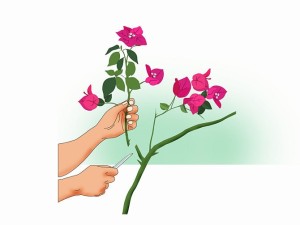 The cut is a part of the root, the stem or the leaf that taken from a plant for reproduction, Cutting is the process in which the stem of a plant is placed in the moist soil or the water to generate a new root system, the cut is a branch carrying many buds.

Cutting is a plant section that originates from the stem, the leaf, or the root and it is capable of developing into a new plant, It is usually placed in warm and moist sand, And many plants especially the horticultural and the garden varieties are propagated through cuttings.

By the use of new techniques, many other plants formerly not susceptible to propagation through cuttings have more successfully reproduced, the plants that develop from cuttings are clones.

The plants such as the coleus and many plants are propagated through the stem cuttings where a portion of the stem containing the nodes and the internodes is placed in the moist soil and allowed to the root?

In some species, the stems can start producing a root when it placed only in the water such as the leaves of  African violet that will root if kept undisturbed in the water for several weeks.

A small part of a plant that is removed by making a cut with a sharp knife is called a cutting which may be a piece of stem, root, or a leaf, and you should take care to see that there are some buds on it, when you make a cutting.

Cutting of the parent plant (which has some buds on it) is taken, and its lower part is buried in the moist soil, After a few days, the cutting develops the roots, the shoot, and it grows into a new plant.

Cutting is known as striking or cloning, It is a technique for asexually propagating in plants in which a piece of the stem or the root of the source plant is placed in a suitable medium such as the moist soil, the potting mix, the coir or the rock wool, It produces new roots and stems, and becomes a new plant independent of the parent.

The plants like the rose, the bougainvillea, the chrysanthemum, the grapes, the sugarcane, the bananas, and the cactus can be grown by means of cuttings, and the advantage of cuttings method is that by using this method we can produce many new plants from just one plant quickly without waiting for the flowers.

The rose plants are propagated by many types of cuttings from the stems or the shoots when a piece of the stem (or the side shoot) having bud is cut from an existing rose plant with the help of a knife, the lower part of this cutting is buried in the moist soil, After a few days, the end of cutting buried in the soil develops the roots and it grows to become a new rose plant.

There are many types of cuttings, Many vegetative parts of a plant can be used, the most common methods are the stem cuttings, It is a cut portion of a stem that contains a terminal bud or the lateral buds and it is placed in growing media to produce the roots, in which a piece of stem is partially buried in the soil, It includes at least one leaf node, The cutting is able to produce new roots, usually at the node. 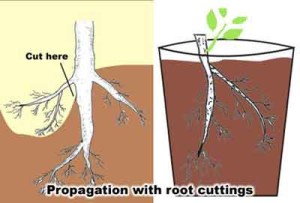 Transportation in plant, Structure & role of the plant stem in the process of transportation