The structure of the sperm in the male reproductive system 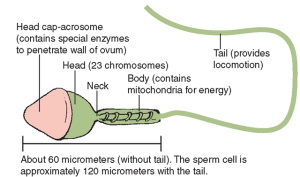 The testes of the adult human male produce about 2 billion sperms per day , the lifetime of a single sperm inside the female vagina ranges from 2 to 6 hours, this period can extend to reach up to 3 days if the sperm managed to break through the cervix and enters the uterus, where it feeds a uterine secretions. 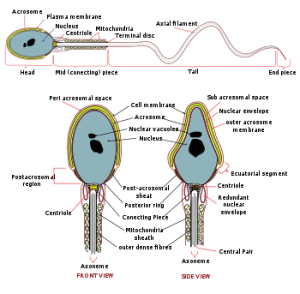 Only one sperm fertilizes the ovum and achieves a pregnancy, The average ejaculation contains close to 100 million sperm according to the World Health Organization.

The structure of the sperm

The sperm is considered very small if it is compared with the ovum, It is mobile, and it consists of the head, the midpiece & the tail, The tail is thin and long, and it is responsible for the movement of the sperm till reaches the ovum.

The head contains one half of the genetic material (the chromosomes), and the midpiece contains the mitochondria which responsible for energy production needed for the movement of the sperms.

The reproductive cells in humans and plants

The gametes in humans and the plants are small in size, and they are produced in large numbers, The sperms and the pollen grains contain half the number of chromosomes that are found in male body cells.