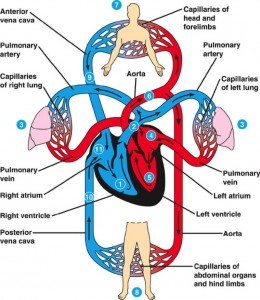 The blood carrying carbon dioxide gas reaches from all the body parts to the right atrium through the two large veins which are the superior and the inferior venae cavae.

The arteries and veins in the human body.

The blood rich in oxygen (which comes from the two lungs) returns to the left atrium through the pulmonary veins, then it flows to the ventricle through a valve.

The left ventricle contracts pumping the blood rich in oxygen to all the body cells through a large artery called the aorta. 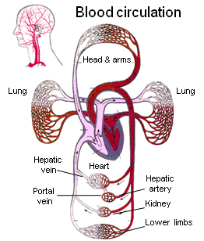 The blood circulation in the human body.