Efforts of scientists to determine the genetic material of living organisms

Genes are the units of genetic information that control the inherited characters, The chromosomes are composed of two substances, which are DNA and proteins, Scientists thought at first that proteins carry the genetic information and not DNA due to the following reasons:

But in 1940, this thought was shown to be wrong and scientists discovered that DNA is the genetic material, that in turn led the scientists to study the molecular basis of inheritance often called molecular biology, one of the most exciting and fast-growing fields of the modern science, Molecular biology is one of the most exciting & fast growing fields of the modern science, where it is interested in the study of the molecular basis of inheritance. 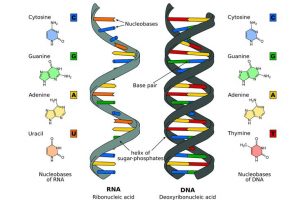 Evidences that DNA is the genetic material

Griffith made his experiment in 1928 on mice using two types of a strain of bacteria causing pneumonia which are (S) strain and (R) strain, as follows:

Avery and his colleagues’ experiment

Conclusion: The chemical and physical analysis shown that this material is DNA.

An objection was carried out at first on that DNA is the genetic material: The DNA that caused the bacterial transformation was not pure enough and was contaminated with protein, perhaps this protein was the transforming material.

Conclusion: DNA is the genetic material and not the protein.

Structure of bacteriophage: Bacteriophage (Phage) is a virus particle that consists of a molecule of DNA inside a protein coat which extends to form something like a tail.

Hershey and Chase used some facts in carrying out an important experiment, which are:

Labelling the element means that converting this element from the stable form into the radioactive form to be detected easily.

We conclude from the bacterial transformation experiments and experiments carried out on phages that the genes of those of pneumonia bacteria and phages are composed of DNA, Note that we restricted this conclusion to the living organisms on which the experiments were carried out.

Are all genes in all living organisms composed of DNA?

No….., Because there are some viruses (as AIDS virus) that don’t contain DNA in their structure but contain RNA, and it was proven that these viruses are exceptions of the rule, as they represent a small percentage of the forms of life, but all various studies confirmed that DNA is the genetic material in nearly all the forms of life.

Quantity of DNA in the cells

On measuring the quantity of DNA in eukaryotes, we found that: