The cytoplasm contains a network of filaments and microtubules called cytoskeleton which acquires the cell support for helping it in maintaining its shape and form, it works as a passage to transport different substances from one place to another inside the cell.

It is round-shaped organelles, Its function is synthesizing protein in the cell, Some of them present free in the cytoplasm ( single or in clusters ) where they produce and release protein directly into the cytoplasm which the cell uses it in its vital processes as growth, regeneration, and others.

It is located near the nucleus in the animal cells ( except the nerve cells ) and in some fungi cells, It is not present in cells of plants, algae, and most fungi, where these cells contain a region of cytoplasm performing the same function instead.

It consists of two tiny particles called centrioles which are named the Centrosome, Each centriole consists of 9 groups of microtubules arranged in triples in a cylindrical shape.

It plays an important role in the formation of the flagella and cilia & the cell division, where the spindle filaments extend between the two centrioles present at each pole of the cell, So, these centrioles withdraw the chromosomes towards the poles of cell. 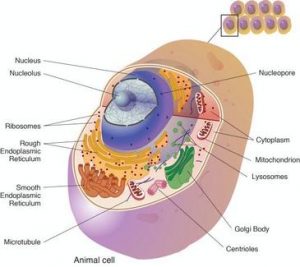 It is a network of membranous canaliculi, It extends through all parts of cytoplasm attached to the nuclear envelope and cell membrane, It forms an internal transferring system that benefits in transferring the substances from a part to another inside the cell, It transfers substances between the nucleus and the cytoplasm.

The rough endoplasmic reticulum is characterized by the presence of a large number of ribosomes on its surfaces, Its functions are Synthesizing proteins in the cell, Making changes to proteins produced by ribosomes, and making new membranes in the cell.

Rough endoplasmic reticulum abundance: Its presence increases in the cells of the stomach lining and endocrine glands where these cells are responsible for the secretion of enzymes and hormones.

The smooth endoplasmic reticulum does have Ribosomes, Its functions are Synthesizing lipids in the cell, Transforming glucose into glycogen, and Modifying the nature of some toxic chemicals to reduce their toxicity.

Smooth endoplasmic reticulum abundance: Its presence increases in hepatic cells, where: Glucose sugar is converted into glycogen that is stored in the liver, Some toxic compounds are converted into less toxic ones.

It is a group of flat membranous round-ended sacs, The number of Golgi bodies in the cell differs according to the cell’s secretion activity, It performs its function in several stages as the following :

It receives the substances that are secreted by the endoplasmic reticulum through a group of transporting vesicles and it classifies and modifies these substances.

It distributes these substances into the places where they are used in the cell, or it may pack them inside secreting vesicles ( lysosomes ) that move forward to the cell membrane where the cell expels them to outside as secretory products.

Functions: Getting rid of worn and senile cells which no longer have benefits to the cell, Digesting the large molecules of nutrients engulfed by the cell and changing them into structurally simplest substances that the cell can benefit from them.

Example: White blood cells use the digestive enzymes present inside the lysosomes to digest and destroy the pathogens ( microbes ) which invade the cell, The cell is not affected by the enzymes of lysosomes because these enzymes are surrounded by a membrane isolating them from the cell components.

They are sac-like membranous organelles, Their wall consists of two membranes from the inner membrane a group of folds known as cristae extending into the matrix, They are considered the main storehouse for the respiratory enzymes in the cell.

They are the storehouse for ATP ( adenosine triphosphate ) compound that is necessary to store energy resulting from cellular respiration due to oxidation of nutrients ( especially glucose ) and the cell can extract the energy from the ATP compound once more, The cristae of mitochondrion works on increasing the surface on which the chemical reactions producing the energy take place.

They are membranous sacs similar to bubbles filled with a fluid, They are small in size and large in number in animal cells , They are collected in one big vacuole or more in plant cells.

Functions: Storing the water, nutrients, and wastes of the cell until it gets rid of such wastes.

They are various shaped membranous organelles, They are present in plant cells only, There are three types of plastids that differ from each other depending upon the type of pigment present in each type of them.

The colours of the plant cell are related to the chromoplasts as in the petals of the flowers or to the presence of some coloured pigments in the cytoplasm as in beet or roselle.

They are present in the roots of sweet potatoes, stems of potatoes and internal leaves of cabbage, They do not contain any type of pigments, They work as centres for storing starch.

They are present extensively in petals of flowers, fruits, and roots of some plants such as rapeseed, They contain the carotenoid pigments which their colours varies between red, yellow and orange, They give the plant or its parts that contain them its characteristic own colour.

Structure of the chloroplast

It is composed of an envelope of a double membrane ( outer and inner ), a matrix called stroma, Complex layers of disk-shaped structures known as the thylakoids, which each group of them forms what is known as granum , Grana are found inside the stroma.

In order to the components of the specimens be more clearer, it can be possible by adding stains to them or changing the contrast in microscope, The green colour of the Elodea leaf is due to the presence of chloroplasts that contain green chlorophyll pigment inside this leaf.

Plant and animal cells are similar in presence of some cellular organelles and there are some other organelles characteristic for each type of these types of cells, The structures restricted on the animal cell can not be seen by the light microscope as centrosomes.