Nucleic acids can create & encode and store information of every living cell of every life-form organism on Earth, they can transmit & express that information inside and outside the cell nucleus, There are two classes of nucleic acids that are deoxyribonucleic acid (DNA) & ribonucleic acid (RNA), Each is made up of four different nucleotides–adenine, cytosine, guanine, and thymine in DNA, and adenine, cytosine, guanine & uracil in RNA.

Nucleic acids are a long chain of repeating subunits of mononucleotides linked together by 3´-5´-phosphodiester bonds. The 3´, 5´-phosphodiester bond is made by esterification of the phosphate group of C5 of the pentose of each nucleotide to the OH group of C3 of the pentose of the adjacent nucleotide. So, the phosphate group is attached by two ester bonds to carbons No. 3´ and 5´ of two pentoses of two successive nucleotides.

The 3´-5´-phosphodiester bonds will connect together the successive mononucleotides throughout the whole length of the nucleic acid polymer. The resultant polynucleotide chain will posses a polarity, one end has a 5´-phosphate terminus while the other end has a 3-hydroxyl terminus. 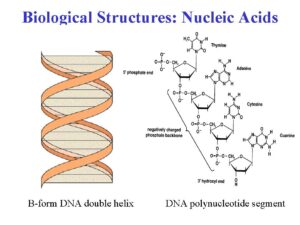 DNA is present mainly in the nucleus as a part of the chromosomal structure, which carries the genetic information. DNA is formed of two long thin polynucleotide chains twisted around each other to form a right-handed double-helical structure. The double helix is folded and complexed with a protein (histones) to form the chromosomal strands.

The two strands of the double helix are antiparallel i.e. one strand runs in the 5´ to 3´ direction and the other in the 3´ to 5´ direction. Along with the double-helical structure of DNA, it was found that the sugar (deoxyribose) and the phosphate groups project outwards forming the backbone of the helix. On the other hand, the bases are present within the core (in the inside) of the helix.

DNA strands can be separated by heating and this is called denaturation of DNA. It is a reversible process.

RNA is present mainly in the cytoplasm of the cell and has three types:

Every 3 successive bases in the mRNA are called a “coden” because they code for a specific amino acid. The process of synthesis of mRNA in the nucleus under the directions of DNA is called transcription by RNA polymerase II enzyme.

It constitutes 15% of all RNA. It is present in the soluble phase of the cytoplasm and maybe also known as soluble RNA (sRNA). It is composed of 74 to 95 nucleotides. tRNA molecules function as carriers for the amino acids and transfer them to the machinery site of protein synthesis in the cell (Ribosome).

There is, at least, a specific tRNA molecule in every cell, each of which is specialized to carry one of the 20 different amino acids required for the process of protein synthesis. Each tRNA molecule is arranged in the form of a clover-leaf, presenting 3 loops and having 2 free ends, the 3´ and 5´ ends.

The amino acid, after its activation, is carried at the 3´ terminus of its specific tRNA. One of the 3 loops of tRNA is known as the anticodon loop which carries the anticodon. The anticodon consists of 3 successive bases with a sequence complementary to a specific codon sequence on the mRNA.

By this way, each tRNA, carrying its specific amino acid, recognizes its proper site on mRNA during the process of protein synthesis. The carried amino acid will be unloaded and then joins the growing polypeptide chain at its proper order.

It constitutes 80% of the total RNA. It is present in the ribosomes of the cytoplasm. The ribosome is a cytoplasmic nucleoprotein structure that acts as the machinery for the synthesis of proteins. On the ribosomes, the mRNA and tRNA molecules interact to translate a specific protein.

The ribosome particle is formed of at least four rRNA molecules complexed with several protein molecules. The eukaryotic ribosomal particle consists of 2 subunits. The larger subunit is known as 60S. while the smaller one is known as 40S (S=Svedberg unit, measured by ultracentrifugation).