Human embryogenesis is the development & formation of the human embryo. It is known as Human embryonic development, and it entails growth from a one-celled zygote to an adult human being. Fertilisation takes place when the sperm cell enters and fuses with an egg cell (ovum). Embryonic development covers the first eight weeks of development; at the beginning of the ninth week, the embryo is termed a fetus.

Differentiation of the secondary mesoderm:

1.  Axial mesoderm in the midline, It is formed of the following structures arranged in a craniocaudal direction:

The axial mesoderm is absent in the followings:

3. The intermediate cell mass (or nephrogenic cord) lies on either side of the paraxial mesoderm. It gives rise to most of the urinary and genital systems.

4. The lateral plate of mesoderm: 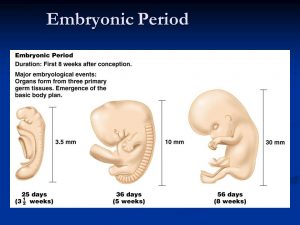 Folding of the embryo

Folding of the embryo means the conversion of the flat trilaminar embryonic disc into a cylindrical embryo. It begins by the end of the 3rd week. It is completed by the 4th week. There are two types of folding:

1. Cephalocaudal folding (head fold & tail fold): It is caused by the rapid longitudinal growth of the central nervous system.

A. The head fold:

Before folding: the following structures are present in the midline of the embryo arranged in a craniocaudal direction:

The following structures lie ventral to the embryo and arranged in a craniocaudal order:

Part of the endodermal yolk sac is enclosed in the cranial part of the embryo it is called the foregut.

After folding it lies cranial, dorsal, caudal, and ventral to the embryo. at late stage of folding the amniotic membrane covers the umbilical cord. The extraembryonic coelom is obliterated by the increasing amniotic cavity, so the somatopleuric primary mesoderm lines the amniotic sac fuses with that line the interior of the chorion.