Cells are bathed in the interstitial fluid that is derived from the blood. The interstitial fluid contains thousands of ingredients, nutrients, vitamins, hormones, ions, and waste products. The cell membrane consists almost entirely of a lipid bilayer, but it also contains large numbers of protein molecules, many of which penetrate all the way through the membrane.

Transport of substances through cell membranes

The molecules of protein in the membrane have different properties for transporting substances. Some proteins contain the watery spaces all the way through the molecule & they allow free movement of the water, as well as selected ions or molecules, these proteins are called channel proteins. Other proteins are called carrier proteins, they bind with molecules or ions, and conformational changes in the protein molecules then move the substances through the interstices of the protein to the other side of the membrane. 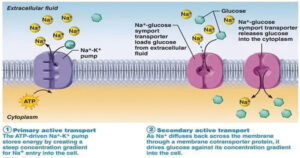 Transport of substances through cell membranes

Although there is continuous traffic across the plasma membrane, selective permeability is characteristic of a healthy, intact cell membrane. Transport through the cell membrane either directly through the lipid bilayer or through the proteins, occurs by one of TWO basic processes: passive or active transport.

Passive Transport means random molecular movement through intermolecular spaces in the membrane or in combination with a carrier protein, from areas of high concentration to areas of low concentration, by the aid of the kinetic energy of the molecules. The molecules diffuse along down, their concentration gradient, and without any energy input from the cell. A molecule can diffuse through the membrane of it is:

It is the transport of substances either through the lipid bilayer or through the channel proteins of the cell membrane along the electrochemical gradient & according to the physicochemical laws.

Simple diffusion through the lipid bilayer

Non-polar and lipid-soluble substances (hydrophobic substances) diffuse directly through the lipid bilayer e.g. oxygen, carbon dioxide, and fat-soluble vitamins. Because oxygen concentration is always higher in the blood than in tissue cells, oxygen continuously diffuses from the blood into the cells, whereas carbon dioxide diffuses in the opposite direction.

The diffusion of water and water-soluble substances occurs through channel proteins. The channels are highly selective. Thus, the sodium channel is specifically selected for the passage of sodium ions, Conversely, another set of protein channels is selective for potassium transport. Some channels are continuously opened (leak channels). Others are controlled by gates that can be opened or closed by various chemicals or electrical signals.

Factors affecting the rate of diffusion

Factors affecting the permeability of the membrane

It is also called carrier-mediated diffusion because the transported substance uses a specific carrier protein, most probably lipoprotein molecule. The substance at the outer side of the lipid membrane combines with a carrier, forming a complex that passes through the membrane, where it splits at its inner side. The absorbed substance passes toward the cytoplasm and the carrier toward the outer surface of the membrane and the process can be repeated.

It occurs in cases of large-sized particles and lipid insoluble particles. Facilitated diffusion is important to transport the polar and/or large molecules such as sugars and amino acids. Facilitated diffusion depends on the availability of the carrier, high concentration gradient of the substance through the membranes, rapid combination and splitting of the carrier with the transported substance, and saturation of the carrier. As glucose is normally in higher concentrations in the blood than in the cells, it can be transported from the blood into the cells in association with a specific carrier.

Active transport is the movement of substances across the membrane in combination with a carrier protein against energy gradients: uphill. It requires an additional source of energy derived from the cell. There are two major mechanisms of active membrane transport: primary and secondary active transport.

Active transport occurs only through the lipid layer of the cell membrane where the transported substance combines with a specific carrier protein. It requires energy derived directly from the breakdown of adenosine triphosphate (ATP) or another high-energy phosphate compound (creatine phosphate). This leads to the conformational change in the carrier and it pumps the carried substance across the membrane. The most important example of a primary active transport is the sodium-potassium (Na+-K+) pump.

It is a transport process that pumps sodium ions outward of the cell through the cell membrane and at the same time pumps potassium ions from the outside to the inside of the cell against their concentration gradient.

In Na+-K+pump, the carrier protein is a complex of two separate globular proteins: a larger one called the “a” subunit, and a smaller one, the “b” subunit. The larger protein has three specific features:

When potassium ions bind on the outside of the carrier protein and the sodium ions bind on the inside, the ATPase function of the protein becomes activated. This then cleaves one molecule of ATP, splitting it and liberating a high-energy phosphate bond. This energy causes a conformational change in the carrier molecule and extruding the sodium ions to the outside and potassium ions to the inside.

Electrogenic nature of the Na+-K+pump

The fact that the Na+-K+pump moves three Na+ ions to the exterior for every two K+ ions to the interior creates positivity outside the cell and negativity on the inside (membrane potential). Na+-K+pump is said to be electrogenic because it creates an electrical potential across the cell membrane, which is a basic requirement for the functions of excitable tissues.

In this type of transport, there is a carrier existing in the lipid layer of the membrane, which has one site for one sodium ion and the other site may be used by one molecule of glucose, galactose or amino acids. The two sites must be occupied at the same time before the carrier can act. As in primary active transport, the molecules move against their electrochemical gradient. The energy supplied for this process comes from the movement of sodium along its electrochemical gradient.

Glucose and amino acids are transported into most cells against large concentration gradients by the co-transport mechanism. The excess sodium outside the membrane always attempts to diffuse to the interior, uses the stored energy to pull other substances along with it through the membrane. This is achieved by means of a carrier protein that serves as an attachment point for both the sodium ion and the substance to be co-transported.