Bacterial infection is due to the disturbance in the balance between bacterial virulence and host resistance, The objective of bacteria is to multiply rather than to cause disease; and it is in the best interest of the bacteria not to kill the host.

We live in an environment that favors the microbe because the growth rate of bacteria far exceeds that of most eukaryotic cells, The human body carries 10 times more bacteria than human cells, and only 50/103 of bacterial species we carry cause disease.

The normal microbiota denotes the population of microorganisms that inhabit the skin and mucous membranes of healthy normal persons, The normal microbiota provides the first line of defense against microbial pathogens, assists in digestion, and contributes to the maturation of the immune system, The skin, and mucous membranes always harbor a variety of microorganisms that can be divided into: 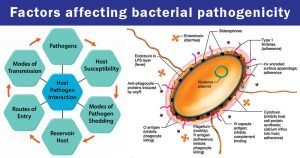 Pathogens can be classified as primary pathogens or opportunistic pathogens.

Individuals susceptible to opportunistic infections include the elderly, patients undergoing chemotherapy, people with immunodeficiencies (e.g. AIDS), patients who have had a breach of protective barriers (such as a severe wound or burn). Examples:

The infectivity of the pathogen (capacity to initiate infection) is related to:

The pathogen should be able to gain entry to the host, travel to the location where it can establish an infection, evade or overcome the host’s immune response, and cause damage (ie., disease) to the host, In the body, most bacteria cause infection first by attaching or adhering to host cells, usually epithelial cells.

After the bacteria have established a primary site of infection, they multiply and spread directly through tissues or via the lymphatic system to the bloodstream, This allows bacteria to spread widely in the body and permits them to reach tissues particularly suitable for their multiplication.

Many factors determine bacterial virulence or the ability to cause infection and disease, These factors help the microorganisms to invade the host, evade host defenses, and cause disease, The following are types of virulence factors:

Certain bacteria have specialized structures e.g.pili, that help their adherence to the host cell mucous membranes thus allow them to start the disease process, If they did not adhere they will be swept away e.g. E. coli have pili to mediate the attachment to urinary tract epithelium, The lipoteichoic acid cause adherence of the streptococci to buccal epithelial cells.

It is the ability of bacteria to invade the tissue and multiply, Invasion of the host’s epithelium is central to the infectious process.

Some pathogens evade phagocytosis or leukocyte microbicidal mechanisms by adsorbing normal host components to their surfaces, For example, Staphylococcus aureus has surface protein A, which binds to the Fc portion of IgG, Other pathogens have polysaccharide capsules that impede phagocytosis (e.g., S. pneumoniae and N. meningitidis), S. pyogenes has M protein.

Toxins produced by bacteria are generally classified into two groups: endotoxin (LPS), which is present in the outer membrane of Gram-negative rods, and exotoxins which are secreted by bacterial cells.

These are produced by pathogens to play important roles in the infectious process. Example: Staphylococcus aureus produces coagulase, which works in conjunction with blood factors to coagulate plasma, Coagulase contributes to the formation of fibrin walls around staphylococcal lesions, which helps them persist in tissues, Hyaluronidases are enzymes that hydrolyze hyaluronic acid, a constituent of the ground substance of connective tissue (e.g., staphylococci, streptococci). IgA proteases destruct mucosal IgA secreted by Neisseria meningitidis, Haemophilus influenzae, and Streptococcus pneumoniae.

A biofilm is an aggregate of interactive bacteria attached to a solid surface or to each other and encased in an exopolysaccharide matrix, A single species of bacteria may be involved or more than one species may coaggregate to form a biofilm, The bacteria in the exopolysaccharide matrix may be protected from the host’s immune mechanisms, This matrix also functions as a diffusion barrier for some antimicrobials, Biofilms are important in human infections that are persistent and difficult to treat (e.g. Staphylococcus epidermidis of central venous catheters, prosthetic infections).

Bacteria can adapt to a variety of environments that include external sources such as soil, water, and organic matter or internal milieu as found within insect vectors, animals, and humans, where they normally reside (reservoir of infection).

An anatomic site through which pathogens can pass into host tissue is called a portal of entry, The most frequent portals of entry of pathogenic bacteria into the body are the sites where mucous membranes meet with the skin, which are the respiratory (upper and lower airways), gastrointestinal (primarily mouth), genital, and urinary tracts.

Pathogens may also enter the body through a breach in the protective barriers of the skin and mucous membranes (e.g., wounds, insect bites, animal bites, needle pricks), There must be a mode of transmission of bacteria to a new host. Different modes of transmission include the following:

For the pathogen to persist, it must put itself in a position to be transmitted to a new host, leaving the infected host through a portal of exit, Similar to portals of entry, the most common portals of exit include the skin and the respiratory, urogenital, and gastrointestinal tracts.

Characteristics of Exotoxins and Endotoxins

They are excreted by living bacterial cells, They are produced by both Gram +ve and Gram -ve bacteria, They are polypeptides, They are relatively unstable; toxicity is destroyed rapidly by heating at a temperature above 60 °C, They are converted to antigenic, non-toxic toxoids by chemicals or heat (e.g. tetanus toxoid), they usually bind to specific receptors on host cells and exerts a specific action, Exotoxins may be subclassified as enterotoxins, neurotoxins or cytotoxins.

They are integral parts of the cell wall of Gram-negative bacteria. They are released upon bacterial death, They are found only in Gram-ve bacteria, They are Lipopolysaccharide (LPS) complex, They are relatively stable, withstand heating at a temperature above 60 °C for hours without loss of toxicity, and they are not converted to toxoids.

Specific receptors not found on host cells, LPS activates macrophages and neutrophils, Pro-inflammatory cytokines, such as IL 1-, IL6-, IL8-, TNF-α, and other cytokines, are released, and the complement and coagulation cascades are activated, The following can be observed clinically: fever, leukopenia, and hypoglycemia; hypotension and shock resulting in impaired perfusion of essential organs (eg, brain, heart, and kidney); intravascular coagulation; and death, from massive organ dysfunction.