Natural (Non-specific or innate) immunity, How does human body protect itself from pathogen ?

Mechanisms of the immune system in man

There are two systems of immunity in man, which are Natural (Non-specific or innate) immunity, Acquired ( Specific or adaptive ) immunity, Although the two systems of immunity are different, they work together in a cooperation & harmony as the innate immunity is essential for the acquired immunity to work successfully and vice versa, where each of them uses different mechanisms that activate the immune response of the other system to help the body to deal successfully with pathogens.

It is a group of defence mechanisms that protects the body and is characterized by rapid and effective response to resist, fight and destroy any microbe or foreign body that invades the body, these mechanisms are non-specific against a specific type of microbes or antigens, Natural immunity can be classified into two lines of defence, as the following:

The first line of defence

It is a group of physical or natural barriers in the body (such as skin, mucous, tears, sweat and hydrochloric acid of the stomach) and its main function is preventing the pathogens from entering the body. 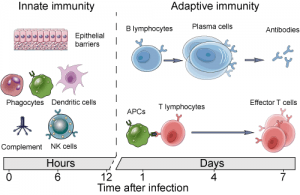 Means of the first line of defence

The second line of defence

This system acts if pathogens succeeded in penetrating the first line of defence and invaded body tissues through a slash in the skin for example.

The second line of defence is an internal system in which the body uses successive non-specific mechanisms that surround the invading microbes to prevent them from spreading and it starts by severe inflammation.

The inflammatory response is a non-specific defence mechanism in the area of injury as a result of the damage of the tissue caused by the injury or an infection.

Steps of the second line of defence mechanism

When microbes or foreign bodies invade the body tissues, the inflammation takes place that leads to the occurrence of some changes in the area of injury, where specific cells (like mast cells and basophils) secrete large quantities of inflammation-generating substances, the most important one is histamine (chemical substance).

The inflammation-generating substances (as histamine) work on dilating the blood vessels in the area of injury to the maximum limit, they work on increasing the permeability of arterioles and capillaries to blood fluids which leak from the blood circulation, this leads to:

There are two other substances found in most tissues in the second line of defence, which are interferons and natural killer cells (NK).

When the skin is cut, bacteria penetrate this wound, The presence of bacteria causes the mast cells to secrete histamine granules to the surrounding tissue, Histamine granules are chemicals that increase the permeability of local blood vessels & stimulate other immune cells.