Except Duodenum and Hindgut 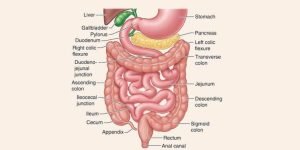 Rotation of the duodenum to the right (clockwise) leads to:

The proliferation of the endoderm occurs followed by recanalization.

So, its upper is endodermal and its lower half is ectodermal.