The classification of metals according to their chemical activity

The metals and chemical activity

Very active metals are metals which react with oxygen as soon as being exposed to humid air, so they lose their metallic luster such as sodium and potassium, Sodium and potassium are kept under kerosene surface to prevent their reaction with the atmospheric oxygen.

Less active metals are the metals that react with oxygen if they left in the air for some days and a layer of rust is formed such as iron, aluminum and copper. 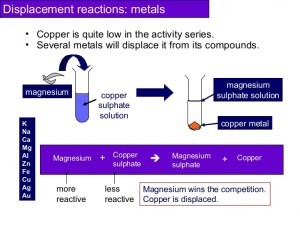 Copper is low in the activity series.

Steel bridges and the holders of light bulbs are painted from time to time to protect them from rust and corrosion.

Metallic spare parts of cars are covered with grease to protect them from rust and corrosion, Washing of cooking pans are made of aluminum with a rough material to remove any layer formed on them.

Gold and silver are very inactive

Inactive metals are metals that find great difficulty to react with oxygen such as silver, platinum, nickel, gold and chromium.

Nickel, gold and silver are used to cover other substances that rapidly gain rust to protect them from the corrosion.