What are the kinds of molecules?

The molecules and the matter

The molecules of one substance are alike in properties, but they differ from other substance molecules, the molecule is composed of tiny structural units called the atoms, A molecule is a group of two or more atoms that stick together and they are very small that nobody can see them except with an electron microscope.

The difference in the molecules of various substances is found as a result of the difference of the atoms which are involved in the structure of the molecule through the number of atoms, the kind of atoms and the way of combination together. 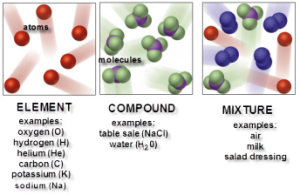 There are three types of molecules which are the element molecule, the compound molecule & the mixture.

The element molecule is formed of similar atoms (one or more atoms) that combine together, The element is the simplest pure form of matter which can not be analyzed chemically into a simpler form. The elements molecules formed of an only atom (monoatomic) as solid (copper, iron, aluminum, sulphur, magnesium, carbon), liquid ( mercury), and Nobel gases (helium, neon, krypton, xenon & radon).

The elements molecules consist of only one kind of atom, they can’t be broken down into a simpler type of matter by either the physical or the chemical means, and they can exist as either atoms (e.g. argon) or molecules (e.g. nitrogen).

The compound molecule is formed of different atoms. the compound is a substance which is formed from the combination of atoms of two or more different elements with constant weight ratios, Some known compounds as sodium chloride molecule (table salt), water molecule, and ammonia molecule.

The compound molecule can be broken down into a simpler type of matter (the elements) by the chemical means but not by the physical means, It has properties that are different from its component elements, and it always contains the same ratio of its component atoms.

The mixture molecule consists of two or more different elements or compounds physically intermingled, It can be separated into its components by physical means, and it often retains many of the properties of its components.