Bitcoin is the biggest cryptocurrency on the market, Nearly all cryptocurrencies use some code or some features pioneered by Bitcoin in an attempt to make a better version of the digital gold, One of Bitcoin’s biggest gripes is scalability, With Cardano’s implementation of smart contracts, scalability is hardly an issue, Cardano wasn’t created to replace bitcoin or to be the best, but it sure puts up a good fight.

Bitcoin is launched in 2009, Market capitalization is $153 billion, Bitcoin is the original cryptocurrency, It is the most popular & influential blockchain network, and it has the most protected system against attackers, but transactions are expensive as growing demand has pressured Bitcoin’s network, The system can process only about seven transactions per second that guzzle electricity because of its proof of work consensus protocol, specially made to make mining labor-intensive.

When transactions are verified on the Bitcoin blockchain, they remain on the public ledger forever, so, the blockchain ledger becomes bigger & bigger, The problem with this is that every single miner on the network must keep a copy of every single transaction, This causes scalability issues.

Blockchain platforms like Cardano are perfect for committing an anonymous crime (this is not a recommendation), Cardano is building a blockchain that does things differently by separating data that is not relevant to the people involved in the transaction when validators help confirm the movement of the funds, they only need to maintain the data that is relevant to the transaction, not the entire blockchain. 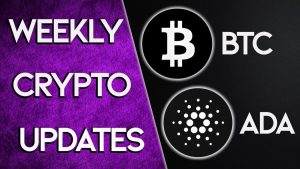 Bitcoin was trading at pennies in 2010, now, people have become multimillionaires by investing in it early, The only reason everyone didn’t invest in bitcoin at the time was that the concept was difficult to understand, or it was seen as a scam due to all the FUD that was being spread following its announcement.

Bitcoin uses a consensus model called “Proof-of-Work”, To help authenticate a transaction, miners use their computing power to solve a really difficult puzzle, It’s like a mathematical equation that is so difficult, no human being could solve it, The problem with Proof-of-Work is that as the puzzle becomes more & more complex, miners need to use more & more electricity.

The team is looking to install a protocol called “Sharding”, as more & more people use the network, the number of transactions per second increases, Cardano performed a test in late 2017 which allowed the blockchain to process 257 transactions per second, which is significantly more than Bitcoin & Ethereum, However, the long-term aim is to increase this number to tens of thousands per second.

The second main function of ADA coin is to allow people to create smart contracts & dApps (decentralized applications), This could be anyone from corporations, governments or even individuals, if Cardano is to get their smart contract protocol to go global, they need to improve their scalability issues.

If Cardano is able to meet these objectives, their technology would be perfect for everyday applications, as it would be near impossible for people to hack and the application would never go offline, It would mean that confidential data remains confidential.

Bitcoin had released with proof of stake consensus as well as quick & cheap transactions, Cardano is doing the same thing as Bitcoin but with $3 transaction fees that take 10 minutes to process, and proof of work consensus that uses ridiculous amounts of electricity.

Cardano is a new idea with technology that could help Bitcoin and other altcoins to scale better, Bitcoin hasn’t been practical for over a year now, While you can purchase items for Bitcoin, it takes far longer for transactions to process than coins like Cardano, Litecoin & Ethereum, people mainly trade Bitcoin for profit, Bitcoin is almost obsolete when looking at other altcoins on the market, such as Cardano.

Cardano will be valuable based upon hard work, real-world use and the utility of the platform, Cardano offers many great features to the table, With a blockchain that offers better value pans & confidence, the Cardano team knows that all crypto investors are looking for great value, trustworthy crypto, Nobody wants to invest money into something only to be afraid of what could come next, Cardano could be a good crypto to invest in, With scientific procedures supporting it and futuristic goals.