Nanotechnology is the science and engineering of controlling the matter at the molecular scale to create devices with novel chemical, physical, and biological properties, It can change how we diagnose and treat cancer.

Cancer occurs when the body cells are divided continuously without controlling, The mass resulted from this division is called the tumor.

The Egyptian Scientist Dr. Mustafa El Said discovered a way to detect cancer cells and kill them by using very small molecules of gold measured by the nanometer unit, so they called Nano-molecules and this technic is called Nanotechnology that we can benefit from it in discovering cancer disease and treatment of cancer. 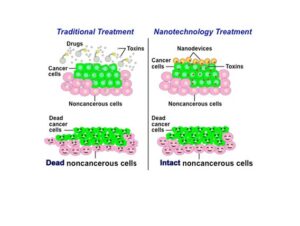 Nanoscale objects have dimensions smaller than 100 nanometers, Nanotechnology is used in the biosciences, the electronics, the magnetics, the optics, the information technology, and the materials development, all of which have an impact on the biomedicine.

Discovering the cells infected with cancer by using Nano-technical by loading the proteins (that have the ability to attach to the cancerous cell secretions) with Nano-molecules of gold and then injecting them into the patient.

The golden molecules pass through the blood of the patient, then the proteins attach to the cancerous cell surface to monitor it through a microscope, each cell separately.

Nanotechnology can provide rapid and sensitive detection of cancer-related targets, It helps the scientists to detect the molecular changes even when they occur only in a small percentage of cells.

The cancer therapies that are limited to the surgery, the radiation, and the chemotherapy, All the three methods have risk damage to the normal tissues or incomplete eradication of cancer.

Nanotechnology targets the chemotherapies directly and selectively to the cancerous cells and the neoplasms, They guide in the surgical resection of tumors, and they enhance the therapeutic efficacy of radiation-based and other treatment modalities.

The current imaging methods can only readily detect cancers once they have made a visible change to the tissue, Thousands of cells will have proliferated and perhaps metastasized, and when visible, the nature of the tumor, malignant or benign.

Two things would be necessary which are something that specifically identifies the cancerous cell and another thing that enables it to be seen, and they can be done through nanotechnology.

The antibodies that identify the specific receptors found to be overexpressed in the cancerous cells can be coated by nano-particles such as the metal oxides that produce the high contrast signal on the magnetic resonance images or computed tomography scans, The antibodies that on these nano-particles will bind selectively to the cancerous cells, and lighting them up for the scanner.

The gold particles could be used to enhance the light scattering for the endoscopic techniques like the colonoscopies, Nanotechnology will help in the molecular markers visualization that identifies the specific stages and the types of cancers, allowing the doctors to see the cells and the molecules undetectable through conventional imaging.

Treatment of cancer by using Nano-molecules of gold by focusing laser with a certain degree to the molecules of gold, then they absorb the light and convert it into the heat which burns and kills the infected cell.

Microscopic bombs were used to kill the cancer cells in experimental mice, Mice suffered from the cancer were able to live 300 days after this treatment, As for mice that did not receive treatment, They can not live more than 43 days.

Nanotechnology is being applied to cancer in two broad areas which are the nano-vectors development such as the nano-particles which can be loaded with the drugs or the imaging agents and then they are targeted to the tumors, and high-throughput nano-sensor devices for detecting the biological signatures of cancer, So, They could lead to earlier diagnosis and better treatment for the patients with cancer.

Nanotechnology & Why is the behavior of matter unique (unusual) on the Nano scale?