Immune response is a series of specific defence mechanisms that done by the lymphocytes to resist the pathogen, The acquired immunity is done through two separated mechanisms that are actually interconnected with each other, which are: 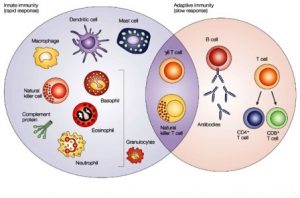 Humoral immunity is the immune response through which the B-lymphocytes defend the body against antigens of the pathogens (like bacteria and viruses) and toxins that present in the body fluids (blood plasma and lymph) by producing antibodies.

Attachment of B-lymphocytes with antigens:

Activation of the helper T-lymphocytes:

The activated B-cells will divide, multiply and differentiate into :

Cellular immunity is the immune response that done by T-lymphocytes through the receptors found on their membranes which give them a specific response to the antigens.

Specific response to antigens: Each T-cell produces during its maturation a specific type of receptors which is specialized to its membrane, Therefore, each type of these receptors can bind to a single type of antigens.

The role of macrophages:

The activated helper T-lymphocytes do the following:

The role of the cytotoxic T-cells (TC):

The cytotoxic T-cells can recognize the foreign bodies by the help of the receptor CD8 found on their surfaces, whether these foreign bodies are transplanted tissues or the antigens of microbes that enter the body or carcinogenic cells and destroy them, when these cells bind to the antigen, they create pores in the membrane of the foreign body by secreting:

Inhibition of the immune response

After destroying the antigens, the suppressor T-cells (TS) bind by the help of the receptor CD8 found on their surfaces to the plasma B-cells, helper T-cells and cytotoxic T-cells to secrete proteins called “lymphokines” which suppress or inhibit the immune response.

Acquired immunity passes through two stages, which are:

It is an immune response to a new pathogen, B and T-cells are responsible for the primary immune response, where they respond to the antigens of this pathogen and attack them until they are destroyed, It is a slow response as it takes between five to ten days to reach its maximum productivity of B and T-cells that need time to multiply.

It is accompanied by the appearance of disease symptoms because the infection becomes widespread in the body, Both types of memory cells ( T & B ) are produced, but remain inactive.

It is an immune response to the same pathogen that has been infected the body before, Memory cells are responsible for the secondary immune response because they store information about the antigens that had been fought by the immune system in the past.

Type of cells that store information about the antigens that had been fought by the immune system in the past, Human body contains two types of memory cells, which are Memory B-cells and Memory T-cells.

Example: Human is infected with measles once during his lifetime because he gains acquired immunity against this disease.

Natural (Non-specific or innate) immunity, How does human body protect itself from pathogen?