Myasthenia gravis is a serious and sometimes fatal disease in which skeletal muscles are weak and tire easily. It occurs in 25 to 125 of every 1 million people worldwide. It is caused by the formation of antibodies to muscle acetylcholine receptors. The thymus may play a role in the pathogenesis of the disease by supplying helper T cells that cross-react with acetylcholine receptors. In most patients, the thymus is hyperplastic. Thymectomy induces remission in 35% of patients.

The lymphatic system is closely related to the immune system. It consists of:

Primary (central) lymphoid organs are responsible for the development and maturation of lymphocytes. They are the thymus and bone marrow. Secondary (peripheral) lymphoid tissues provide the proper environment in which lymphoid cells can react with each other and with antigens to elicit an immunological response against the different antigens. They include lymph nodes, Spleen, Lymphoid nodules in the tonsils, Peyer’s patches in the ileum and appendix. 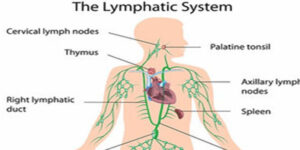 The thymus is located in the superior mediastinum behind the sternum. It is active in childhood but it progressively atrophies from puberty to old age where most of the lymphoid tissue is replaced by adipose tissue.

Histological structure of the thymus

The medulla is pale because of its loosely-packed cells. The medulla of adjacent lobules is connected together due to the incomplete lobulation of the gland. The medulla contains a small number of mature small lymphocytes, few macrophages, a large number of loosely- arranged epithelial reticular cells. They form the cytoreticulum of the medulla and Hassall’s corpuscles.

Hassall’s corpuscles are whorls of eosinophilic concentrically-arranged flattened epithelial reticular cells. In the central portion of the corpuscle, the epithelial reticular cells are filled with keratohyaline granules and cytokeratin filaments and they may calcify. Their function is still not fully understand. Lymphoid nodules, B lymphocytes, and plasma cells are lacking in the thymus.

The only blood vessels supplying the cortex are looped capillaries that extend from the arterioles at the cortico-medullary junction. The blood-thymus barrier consists of:

The function of the blood-thymus barrier prevents circulating foreign antigens from reaching the thymic cortex where T lymphocytes are still in the state of education and proliferation. The lymphocytes that reach maturity in the cortex then enter the circulation through the post-capillary venules present at the cortico-medullary junction.