Physiologically, the large intestine could be divided into three parts:

Functions of the large intestine

The large intestine has no digestive functions in man. In herbivores, cellulose is hydrolyzed into glucose by the action of bacteria in the colon.

About 1500 ml of fluid chyme passes daily from the ileocecal valve. The amount of fluid in feces per day is about 200ml. This indicates that about 1300 ml of water has been absorbed in the large intestine, especially in the caecum and ascending colon. The large intestine can absorb water, salts, glucose, and other crystal-loids, but with a much slower rate than the small intestine. 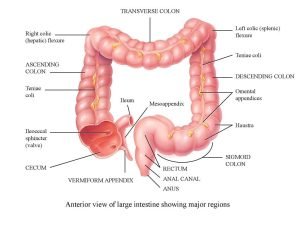 Mucus has the following functions

In addition to the mucus, the mucosa secretes large quantities of water and electrolytes in cases of bacterial infection, to dilute the irritating factors and to cause rapid movement of the feces toward the anus.

In the large intestine, bacteria synthesize valuable substances such as vitamin K. vitamin B complex and some amino acids. These substances are absorbed and supplement the dietary vitamins. Prolonged use of antibiotics and intestinal antiseptics destroy the bacteria leading to vitamin deficiency.

Feces are stored in the pelvic colon till the time of defecation.

Innervation of the large intestinal muscles

Motility of the large intestine

The movements of the colon include segmentation contractions and peristaltic waves like those occurring in the small intestine, The third type of contraction that occurs only in the colon is the mass action contraction, in which there is a simultaneous contraction of the smooth muscle over large confluent areas, It is facilitated by the gastro-colic and duodeno-colic reflexes, These contractions propel the fecal material in one segment en masse further down the colon, They also move material into the rectum, causing rectal distension which initiates the defecation reflex.

It is a complex muscular act to empty the colon from the middle of the transverse part to the anus.

1. Most of the time, the rectum is empty of feces. The ingestion of food and distension of the stomach and duodenum stimulates 2 reflexes; the gastrocolic reflex and duodeno-colic reflex. These 2 reflexes stimulate mass movement to push the contents of the pelvic colon into the rectum leading to its distension. The reflexes are transmitted by way of the autonomic nervous system.

a- Intrinsic defecation reflex: which is mediated by the local enteric nervous system in the rectal wall as follows: Distention of the rectum stimulates afferent signals that spread through the myenteric plexus to initiate peristaltic waves in the descending colon, sigmoid, and rectum, forcing feces toward the anus.

b- Parasympathetic defecation reflex that involves the sacral segments of the spinal cord. When the nerve endings in the rectum are stimulated, afferent signals are transmitted first into the spinal cord (along the pelvic nerve through the posterior roots of sacral segments 2, 3, 4) and then reflexly back to the descending colon, sigmoid, rectum, and anus by way of parasympathetic nerve fibers in the pelvic nerves again.

3. Defecation signals entering the spinal cord initiate other effects such as:

Development of the digestive system

Development of the primitive gut tube

The primitive gut tube extends from the oral membrane to the cloacal membrane, It is divided into:

Arterial supply of the gut

Development of the oesophagus

3- Most cranial part of the dorsal border grows rapidly → fundus.