The circulatory system has the lymphatic system, which circulates lymph, It is known as the cardiovascular system or the vascular system, It is a vital organ system that delivers essential substances to all cells for basic functions to occur, It is a network composed of the heart as a centralised pump, It includes blood, blood vessels, and the heart.

Physiology of the circulatory system

Anatomic considerations and hemodynamics of the circulation:

The wall of the aorta and large arteries contain a relatively large amount of elastic tissues. They transport blood under high pressure to the tissues. They are stretched during systole and recoil during diastole to prevent masked increase or decrease in the arterial blood pressure.

Arterioles act as control valves through which blood is released into the capillaries. Their muscular walls can be constricted or dilated. giving them the capability of markedly altering blood flow to the capillaries in response to changing tissue needs. They are the main site of resistance to blood flow in the circulatory system; they are called ”resistance vessels”. 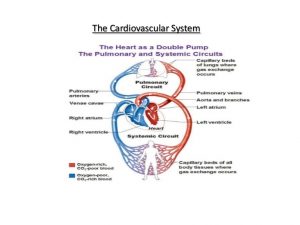 Physiology of the circulatory system

The arterioles are divided into smaller muscle walled vessels, called metarterioles, which give rise to capillaries. The openings of the true capillaries are surrounded by a minute smooth muscle precapillary sphincter, which is not innervated but can respond to local and circulating vasoactive mediators.

Capillaries have the largest total cross-sectional and surface area. They are thin-walled, consisting of a single layer of endothelial cells surrounded by a basal lamina. They are the site of the exchange of nutrients, water, and gases.

Collect blood from the capillaries and gradually coalesce into progressively larger veins.

The veins are called ”capacitance vessels”. This is because a large volume of blood can be added to the venous system without a large rise in venous pressure. They are considerably constricted on sympathetic stimulation or by local vasoactive mediators.

A variation in venous tone is very important in the circulatory adjustments. Constricting veins reduces the venous capacity and increases the return of blood to the heart. This will increase the effective circulating blood volume.

Volumes of blood in different parts of the circulation

Hemodynamics of the circulation

Flow and resistance determinants of flow: alteration of blood flow through any organ determined is by:

The resistance of a vessel is determined by 3 major variables:

1. Vessel radius (r): is the most important factor determining resistance. If resistance changes, then the following occurs:

2. Blood viscosity (V ): is a property of a fluid that is a measure of the fluid’s internal resistance to flow:

Velocity refers to the rate at which blood travels through a blood vessel.

Histology of the peripheral circulation, Types of capillaries & Lymphatic system