Histology of the peripheral circulation, Types of capillaries & Lymphatic system

The peripheral circulation transports blood around the body, It exchanges nutrients with tissues and stores blood. peripheral circulation alters the blood distribution to meet the needs of the different tissues, The aorta is mainly an elastic structure, Peripheral arteries become more & more muscular until the arterioles, where the muscular layer predominates.

Histology of the peripheral circulation

It is the connection between arteries and veins, It includes capillaries and arteriovenous shunts.

Capillaries make up over 90% of the body vasculature as they anastomose extensively forming the capillary network (capillary bed), which allows the exchange of gases and metabolites between the blood tissues.

Histological structure of a blood capillary

The wall of a blood capillary is composed of a single layer of endothelial cells resting on a prominent basal lamina, which is splitted to enclose the pericytes.

The endothelial cells are joined together by occluding junctions and they are rolled up to form a tube with a diameter of about 9-12 μm i.e. large enough to allow passage of RBCs one at a time. 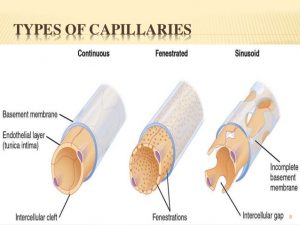 It is a drainage system that collects the excess interstitial fluid, the lymph and returns it to the blood. The lymphatic vascular system is also a major distributor of lymphocytes and other immune components carried through the lymphoid tissue. It consists of the lymph, lymph vessels, and lymphoid tissues.

A. The lymph a viscid substance formed of components of large molecular size that cannot be reabsorbed by the venous side of the blood circulation. These include:

B. The lymph vessels: