Cholesterol can be derived from the diet or synthesized de novo in all tissues especially in the liver, intestine, adrenal cortex, and reproductive organs, All the carbon atoms in cholesterol are provided by active acetate (acetyl CoA) derived from the citric acid cycle by citrate shuttle and NADPH provides the reducing equivalents. Synthesis of cholesterol occurs in the cytoplasm where the enzymes are present. 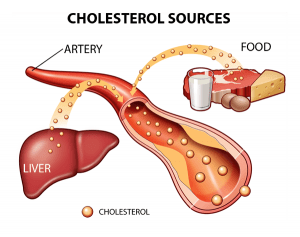 De novo synthesis of fatty acids occurs in the cytosol of many tissues such as the liver, kidney, brain, lung, mammary gland, and adipose tissue, It takes place by the action of a single multifunctional enzyme complex called fatty acid synthase that contains 7 enzyme activities. It adds two carbons by two to the elongating chain. Its function stops upon the formation of palmitate (C16). It Needs:

Excess dietary carbohydrates are the major source of carbons of fatty acid synthesis which occurs in the fed state. Citrate shuttle is responsible for the transport of acetyl COA from mitochondria.

Acetyl-CoA needs to be activated to malonyl-CoA to be used as the elongating unit during fatty acid synthesis. This occurs by CO2 fixation, catalyzed by the enzyme Acetyl-CoA carboxylase, using energy from ATP. Acetyl CoA carboxylase is the regulatory enzyme in this process. This CO2 is released upon condensation of the carbons during fatty acid synthesis. i.e. the only carbons that share in the chain of fatty acids are those of acetyl-CoA.

The free palmitate, the end product of denovo synthesis of fatty acids, must be activated to palmitoyl CoA before it can proceed via any metabolic pathway. Its usual fate is esterification into acylglycerols.

Occur in the endoplasmic reticulum (microsomes) to produce 24 carbons fatty acids e.g cerebronic and nervonic acids that are used for the synthesis of cerebrosides and gangliosides. Most of the elongation reactions are similar to that occur in the cytosolic fatty acid synthase. Also, the source of 2 carbon units is malonyl CoA and NADPH + H+ provide the reducing power.

Phosphatidate (diacylglycerol 3-P) is a common intermediate in the synthesis of phosphoglycerides and triacylglycerols. The starting point is glycerol-3-(P) which is formed either by reduction of dihydroxyacetone phosphate particularly in adipose tissue or by glycerol kinase occurs in the liver, intestine, kidney, and lactating mammary gland. In the intestinal mucosa, 2-monoacyl glycerol is esterified at positions 1 and 3 by acyl CoA to give a triglyceride.

Phospholipids together with cholesterol constitute the tissue lipids that are not consumed during starvation so, they were previously known as constant fat, Essentially all cells can synthesize phospholipids to some degree (except mature erythrocytes.

Lecithin, and cephalin are synthesized from 1.2 diacyl glycerol. The major source for phosphatidylserine in mammals is by base exchange reaction in which ethanolamine is exchanged for the amino acid serine. Phosphatidyl inositol is formed by a different pathway from phosphatydic acid.

The backbone of all sphingolipids is ceramide. Palmitoyl CoA and serine condense and undergo several steps to form ceramide that either converted to sphingo-phospholipid (sphingomyelin) or glycolipids.