Intercellular junctions are structures that provide adhesion & communication between cells. They are mostly present in epithelial cells that are especially characterized by their strong attachment one to another and to the extracellular matrix but can also exist between other types of cells e.g. cardiac muscle fibers.

The main CAMs include integrins, cadherins, selectins, and immunoglobulin superfamily, CAMs may be Ca+2-dependant i.e. affected by the extracellular calcium ions concentration, whereas others are Ca+2 independent.

Cell adhesion is a dynamic process that is particularly evident where non-adhesive cells rapidly become adhesive e.g. leukocytes in inflammation and platelets in blood clotting, the reverse takes place where the temporal loss of adhesion occurs during the migration of skin cells in wound healing to replace lost cells, on the other hand, defective cellular adhesion in malignancy promotes spread of cancer cells and occurrence of metastasis. 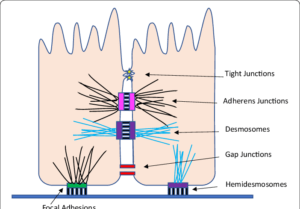 There are 3 types of connecting cell junctions; occluding, anchoring, and communicating junctions:

This junction is present at the apical parts of the cells, Zonulae occludentes are found mainly where no substance should pass in the intercellular space e.g. simple columnar epithelial cells lining the intestine to prevent the passage of the digestive juices and the bacteria to the intercellular spaces. Occluding junction restricts the passage of water, electrolytes, and other small molecules between the epithelium, thereby contributing to the barrier function of the cells.

They are most widely distributed in cells that are subjected to severe mechanical stress such as cardiac muscles and the epidermis of the skin. They provide strong attachment and act as a link between the cytoskeleton of adjacent cells.

Two types of anchoring junctions can be identified:

In several epithelia, the zonula occludens, the zonula adherens and macula adherens are present in a definite order from the apex toward the base of the cell and is called intercellular junctional complexes.

They mediate communication rather than adhesion and beside epithelial cells are also found in cardiac and smooth muscle cells. They permit the exchange of molecules e.g. ions, amino acids allowing passage of signals involved in contraction, integration, and communication from one cell to another.