Calcium metabolism is the regulation of calcium ions (Ca2+) in (via the gut) & out (via the gut and kidneys) of the body, and between body compartments: the blood plasma, the extracellular and intracellular fluids, and bone, calcium plays an important role in a wide range of biological functions, either in the form of its free ion or bound complexes, One of the most important functions of bound calcium is in skeletal mineralization.

Calcitonin is a peptide hormone of 32 amino acids, It is secreted from the parafollicular C cells of the human thyroid (less commonly the parathyroid and thymus), and it is a calcium lowering hormone.

There are two major differences between the calcitonin and the parathyroid feedback system. 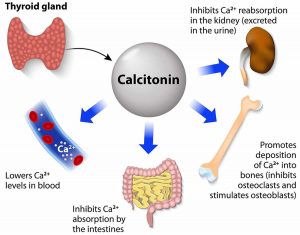 There are 6 types of vitamin D, the commonest of which is vitamin D3 (cholecalciferol). It is formed in the skin from 7-dehydrocholesterol by the action of ultra-violet rays from the sunlight, it is also obtained from dietary sources as fish liver oils, egg yolk, and animal fat (e.g. butter and milk).

Calcitriol is considered as a hormone: Most vitamin D occurs under the skin by ultraviolet irradiation of 7-dehydrocholesterol (non-enzymatic reaction). A small amount is taken in food.

A specific transport protein called the D-binding protein binds vitamin D3 from the skin and intestine to the liver where it undergoes 25-hydroxylation, the first obligatory reaction in the production of calcitriol.

The 250 H-D3 enters the circulation and is transported to the kidney the D binding protein. In the Mitochondria of the renal proximal tubule 25 0H- D3 is hydroxylated at C1 to give 1.25 (OH)2-D3 which is the most potent metabolite of vitamin D.

Vitamin D acts as a regulator of the metabolism of calcium and phosphorus, by promoting the transport of calcium and probably secondarily phosphate into the bloodstream from the intestinal lumen, bones, and renal tubules (target organs).

1- It increases the absorption of both calcium and phosphate from the intestine. A nuclear receptor in the intestinal cell binds to calcitriol, stimulating gene transcription and the formation of specific mRNA. The specific mRNA codes for a calcium-binding protein (calbindin-D proteins).

The calcium-binding protein binds Ca2+ ions and increases intestinal Ca2+ absorption. These proteins act as carrier proteins for facilitated diffusion by which, the calcium ions are transported into these cells. The rate of calcium absorption is proportional to the quantity of calcium tinding proteins. 1.25 DHCC also induces the formation of Ca2+– dependent ATPase in the intestinal cells, which is needed to pump Ca2+ into the interstitium (active transport mechanism).

2- It facilitates Ca2+ reabsorption in the distal nephron of the kidney.

A negative feedback relation exists between the plasma Ca2+ level and the rate of synthesis of 1.25DHCC through PTH as follows:

The synthesis of 1,25 DHCC is also stimulated by a low and inhibited by a high plasma PO4– level by a direct inhibitory effect of PO4– on the 1α-hydroxylase enzyme.

Functions of Ca2+ in the body

Sources, requirement, and absorption of calcium

In normal adult individuals, the daily calcium requirement is about 1 gm, and it is increased during childhood, pregnancy, and lactation. The chief sources of calcium are milk, cheese, eggs, and green vegetables. It is absorbed from the upper small intestine by an active process involving a Ca2+ dependent ATPase, and to a little extent, also by facilitated diffusion.

The adult human body contains about 1100 gm of calcium, 99% of which is present in bones and teeth, while the remaining part is present in soft tissues and extracellular fluid.

A- Calcium in the plasma

The normal plasma Ca2+ level averages 10 mg %. It is present in the following forms:

B- Calcium in bones

The body contains a type of exchangeable calcium that is always in equilibrium with calcium ions in the extracellular fluid. It is present in: