The streptococci are Gram-positive spherical bacteria that characteristically form pairs or chains during growth, They are differentiated from Staphylococci by being catalase-negative, They are widely distributed in nature, Some are members of the normal human flora, and others are associated with important human diseases.

Streptococci can be classified by their haemolytic activities on blood agar into:

The majority of β-hemolytic/streptococci causing infections in man belong to this group of B hemolytic streptococci. It is normally found in the throat or nasal cavity in 5-15% of apparently healthy people (carriers) Like all streptococci, they are Gram-positive cocci, occurring in chains of varying length, non-motile and on sporing.

Like all streptococci, they are catalase negative. They are sensitive to bacitracin which could be used for its identification in place of antigenic study. Susceptibility to bacitracin is determined by placing a disc saturated with bacitracin onto a plate inoculated with Streptococcus pyogenes, after overnight incubation, the zone of inhibition of growth around the bacitracin disc will be detected.

In addition to its carbohydrate (C Ag) group A; Streptococcus pyogenes has and three surface protein antigens (M. T and R) that are useful in serotyping, Of these three, M protein is the most important, M protein acts as a virulence factor by inhibiting phagocytosis, Immunity to infection with group A streptococci is related to the presence of type-specific antibodies to the M protein, Because there are many, perhaps 150 types of M protein, a person can have repeated infections with Streptococcus pyogenes of different M types.

Toxins and enzymes and their role in virulence

The infections can be divided into several categories: 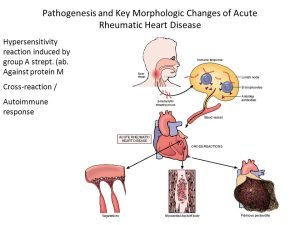 One to four weeks after an acute Streptococcus pyogenes infection, nephritis or rheumatic fever occasionally develops, The latent period suggests that these post-streptococcal diseases are not attributable to the direct effect of disseminated bacteria but instead represent a hypersensitivity response.

Specimens: depend on the nature of the streptococcal infection.

Gram-stained smears of throat swabs are rarely of value in streptococcal pharyngitis because viridians streptococci are part of the normal oropharyngeal flora and cannot be distinguished from the pathogenic Streptococcus pyogenes.

A. Bacitracin sensitivity: Group A streptococci, can be differentiated from the other groups by being sensitive to bacitracin. This is tested for by placing a filter paper disc impregnated with bacitracin on the surface of the culture plate after inoculating it with the organism. A zone of inhibition of growth occurs around the disc if the organism is group A

B. Serological grouping: by using antisera against group antigens.

C. Serotyping: can be made for epidemiological purposes using specific antisera against M and T protein antigens.

Several commercial kits (enzyme immunoassay or latex agglutination tests) are available for rapid detection of group A streptococcal antigen from throat swabs, These tests are rapid, inexpensive and specific but the sensitivity of the tests is low, All negative results must be confirmed by a throat culture.

The measurement of antibodies against streptolysin O (ASO test) is useful for confirming rheumatic fever, These antibodies appear 3 to 4 weeks after the initial exposure to the organism and then persist, the patient’s serum is examined for an elevated antistreptolysin O (ASO titer), A titer of 200 Todd units or more is significant.

Resistance against streptococcal diseases is M-type specific, Thus, a host who has recovered from infection by one group A. streptococcal M type is relatively immune to re-infection by the same type but fully susceptible to infection by another M type, Antibody to streptolysin O develops after infection. It blocks hemolysis by streptolysin O but does not indicate immunity, High titers (>200 Todd units) indicate recent or repeated infection and are found more often in rheumatic individuals than in those with uncomplicated streptococcal infections.

All Streptococcus pyogenes are susceptible to penicillin G. Macrolides (such as erythromycin) and clindamycin have often been recommended for penicillin-allergic patients, Antimicrobial drugs have no effect on established glomerulonephritis and rheumatic fever, In acute streptococcal infections, however, every effort must be made to rapidly eradicate streptococci from the patient, eliminate the antigenic stimulus and thus prevent post-streptococcal disease.