The two results of the female sexual cycle are:

The ovarian changes during the sexual cycle depend completely on gonadotropic hormones. Ovaries remain inactive throughout childhood. At the age of about 8 years, the hypothalamus begins to release LHRH which affects the pituitary. It also begins secreting more gonadotropic hormones, which causes the initiation of monthly sexual cycles between the ages of 11 and 15 years.

The anterior pituitary secretes two different hormones essential for full function of the ovaries; follicle-stimulating hormone (FSH) and- luteinizing hormone (LH), both are glycoproteins. During each month of the female sexual cycle, there is a cyclic increase and decrease in FSH and LH. 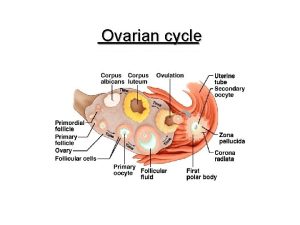 FSH accelerated growth of about 20 primary follicles each month (revise growing follicles). The rate of estrogen secretion accelerates during this phase. After a week or more. one of the follicles begins to outgrow all the others (mature Graafian follicle), and the remainder begins to involute (atresia).

Ovulation is the rupture of the mature follicle and liberation of the ovum. Ovulation in a woman with a normal 28-day cycle occurs 14 days after the onset of menstruation. It is stimulated by a surge in pituitary LH production. As the amount of liquor folliculi in the antrum increases, the oocyte and its surrounding zona pellucida and corona radiate detach from the cumulus oophorus, and float in the antrum.

Under the pressure of the big-sized mature follicle, the overlying superficial part of the ovarian cortex undergoes ischemia that weakens the tissues in this area. Upon rupture of this part, the oocyte with its surrounding corona radiata, is expelled from the ovary.

III. The luteal phase of the ovarian cycle

After the expulsion of the ovum from the follicle, the remaining granulosa cells change rapidly into lutein cells. The change of granulosa cells into lutein cells is mainly dependent on the LH (This function gave LH its name “luteinizing”). In the presence of LH, the degree of growth of the corpus luteum is enhanced, its secretion is greater and its life is extended.

It is also called the yellow body. It is a temporary endocrine gland present in the ovarian cortex, secreting progesterone and estrogens under the influence of LH. It develops from granulosa cells and theca interna cells of the Graafian follicle after ovulation and extrusion of the oocyte.

Both types of lutein cells, show LM & EM features of steroid secretion; abundant SER, mitochondria with tubular cristae, lipid droplets and lipochrome pigment which are responsible for the yellow color of the corpus luteum.

Types of the corpus luteum

a. Corpus luteum of menstruation: When fertilization of the oocyte does not occur, the corpus luteum will soon degenerate. It is small in size, its life span is about 14 days, and then it is replaced by dense fibrous connective tissue, forming the corpus albicans.

b. Corpus luteum of pregnancy: This develops if pregnancy occurs. The chorionic gonadotropin produced by the placenta will stimulate the corpus luteum to maintain itself. It is larger in size than corpus luteum of menstruation, its life span is about 6 months, after which it undergoes gradual fibrosis and is transformed to corpus albicans. The corpus albicans sinks deeper in the ovarian cortex and slowly is replaced by ordinary stromal tissue.

The corpus luteum secretes estrogen, progesterone and inhibin during the luteal phase of the ovarian cycle. These hormones have a strong negative feedback effect on the anterior pituitary gland to decrease the secretion of both FSH and LH. Both FSH and LH in the blood fall to a very low level. Loss of these causes the corpus luteum to degenerate completely.

Termination of the ovarian cycle and onset of the next cycle

The large amounts of estrogen and progesterone secreted by the corpus luteum cause a feedback effect on the hypothalamus to decrease the secretion of both FSH and LH. Therefore, during this period no new follicles begin to grow in the ovary. However, when the corpus luteum degenerates, the loss of feedback suppression allows the anterior pituitary gland to secrete FSH and LH to initiate the growth of new follicles to begin a new ovarian cycle.

Associated with the cyclic production of estrogens and progesterone is an endometrial cycle operating through the following stages:

As a result of loss of hormonal support to the endometrium and spasm of the blood vessels by locally produced prostaglandins, areas of necrosis appear in the endometrium and in the walls of special arteriols leading to haemarrhagic areas which unite together forming the menstrual flow.

All the superficial layers of the endometrium have desquamated, The desquamated tissue and blood in the uterine cavity initiate uterine contractions that expel the uterine contents, Menstrual fluid is normally non-clotting because a fibrinolysin is released along with the necrotic endometrial material, when excessive bleeding occurs from the uterine surface, the quantity of fibrinolysin may not be sufficient to prevent clotting.

Histological changes of the endometrium during menstrual phase:

B) Proliferative (estrogen) phase of the endometrial cycle

The proliferative phase occupies from day 5 to day 14 of the cycle. This phase corresponds to the follicular or estrogenic phase of the ovarian cycle with the development of the ovarian follicles and the production of estrogen.

The spiral arteries elongate with lengthening of the functional layer. The endometrium increases greatly in thickness owing to an increasing number of stromal cells, and the growth of the endometrial glands and blood vessels. At the time of ovulation, the endometrium is approximately 3-4 mm thick.

The secretory phase occupies from day 15 to day 27 of the cycle. This phase corresponds to the luteal or progesterone phase of the ovarian cycle with the development of the corpus luteum and the production of progesterone.

The estrogens cause slight additional cellular proliferation in the endometrium during this phase. Progesterone stimulates the uterine glands to secrete fluid rich in nutrients, particularly glycogen. The glands become enlarged and tortuous and their lumina are sacculated by the accumulated secretion in their interiors. The lamina propria becomes edematous and the endometrium is in maximum thickness (5mm).

The spiral arteries continue their elongation and coiling and extend into the superficial portion of the endometrium, The whole purpose of all these endometrial changes is to produce a highly secretory endometrium containing large amounts of stored nutrients that can provide appropriate conditions for implantation of the fertilized ovum during the latter half of the menstrual cycle.

D) The ischemic phase of the endometrial cycle

This phase occurs at the 28th day of the cycle. This phase corresponds to the regression of the corpus luteum with drop in estrogen and progesterone. Spasm of the spiral arteries close off blood flow and produce ischemia, which leads to necrosis of the functional endometrium. Bleeding begins by rupture of the necrotic blood vessels accompanied by desquamation of the superficial endometrium.

Ovulation does not occur and the cycle is said to be “anovulatory”, Lack of ovulation causes failure of development of the corpus luteum, No secretion of progesterone during the latter portion of the cycle, The cycle is shortened by several days but the rhythm continues, Anovulatory cycles are usually during the first few cycles following puberty and for several years prior to menopause, The cause of nonovulation is that LH secretion is not potent enough to cause ovulation.