Histologically, the CNS is formed of grey and white matter. The grey matter, its color in the fresh state is grey. It is composed of:

Nerve cells in the grey matter are aggregated into large and small nuclei. A nucleus in CNS: it is a group of nerve cells lying close to each other and having the same function. The white matter, its color in the fresh state is white. It is composed of:

Myelinated nerve fibers in the white matter are longitudinally-arranged in ascending and descending tracts. A tract in CNS: it is a group of nerve fibers having the same origin and termination and carrying the same function. 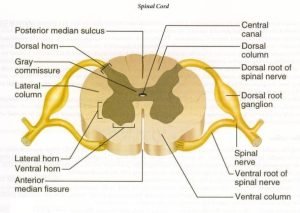 Relation between spinal and vertebral segments

A transverse section shows that the spinal cord is a bilateral structure, consisting of central grey matter and peripheral white matter. The two halves are separated posteriorly by the posterior median septum and anteriorly by the anterior median fissure. They are continuous in the intermediate zone through the grey and white commissures. The central canal is always present in the middle of the grey commissure.

Grey matter of the spinal cord

Laminar architecture of spinal cord: the grey matter of the spinal cord is divided into 10 laminae (from I to X) based upon the cytological features of the neurons in different regions of grey matter.

This horn is broad in the cervical and lumbosacral segments (a greater amount of grey matter for the innervation of muscles of upper and lower limbs). It contains large stellate lower motor neurons (the anterior horn cells). Their axons form the motor fibers emerging in the ventral root of spinal nerves.

Neurons of the ventral horn are divided into 3 groups of nuclei:

The cells of the dorsal horn are small stellate neurons (afferent neurons) that belong to the sensory system (they receive and process sensory input). They are grouped into 3 main nuclei:

This horn appears only from T1 to L2 segments). It is found between the dorsal and ventral horns. The cells are small stellate neurons, belonging to the autonomic nervous system (thoraco-lumbar outflow); their axons form the preganglionic sympathetic nerve fibers. In S2, S3 & S4, the autonomic neurons in the intermediate grey matter give the preganglionic parasympathetic outflow without forming a lateral horn.

Associative nuclei (interneurons are found in all the grey matter (anterior and posterior horns); they are formed of small nerve cells with short axons and are essential in local spinal cord function. They are of two types:

White matter of the spinal cord

Tracts of the spinal cord white matter are classified into; short and long tracts:

They begin and end within the spinal cord originating from the associative nuclei, thus they are associative in function.

a. Tracts carrying sensations that will finally reach the Cerebral cortex. They include:

b. Tracts carrying impulses that will not reach the cerebral cortex but end in the subconscious level, the cerebellum or midbrain. They include:

2. Descending (motor) tracts begin in higher motor centers in the cerebral cortex and brainstem and end in the anterior and lateral horns of the spinal cord. They include:

The transverse section of the spinal cord at its different levels is correlated to the shape and size of grey and white matter in these levels.