The referred pain is called reflective pain, It is pain perceived at a location other than the site of the painful stimulus, An example is the case of angina pectoris brought on by a myocardial infarction (heart attack), where the pain is felt in the left side of neck, left shoulder, and back rather than in the thorax (chest), the site of the injury, Radiating pain is different from referred pain; the pain related to a myocardial infarction could either be referred or radiating pain from the chest.

Irritation of the visceral organs frequently produces pain that is felt not at that site but in some somatic structures that may be a considerable distance away, This is called referred pain.

Examples include the following: 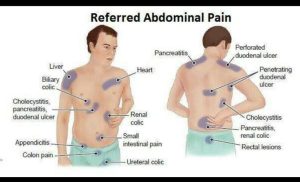 The suggested mechanism is as follows:

For example, the heart and the arm have the same segmental origin, and the testicle migrated with its nerve supply from the primitive urogenital ridge from which the kidney and ureter also developed, The dermatome includes all the structures or parts of the body which are innervated by afferent nerve fibers of one dorsal root.

2. The afferent fibers from both the somatic structure and the viscera converge on the same second-order neurons in the dorsal horn that project to the thalamus and then to the somatosensory cortex, Visceral pain signals (facilitate) the second-order neuron (convergence-facilitation theory or central sensitization).

The somatic nociceptive fibers are normally not activated, but when the visceral stimulus facilitates the same second-order neuron, the somatic fiber activity is transmitted as well to the brain. The brain cannot determine whether the stimulus came from the viscera or from the area of referral and refers the pain to the somatic structure, since, it is accustomed to perceive pain from somatic structures.

Neuropathic pain is a shooting, stabbing often devastating pain. It is a persistent pain that arises from functional changes occurring in the CNS secondary to peripheral nerve injury and not due to stimulation of pain receptors as in nociceptive pain, Common qualities include “pins and needles” sensations and numbness, After chronic nerve injury, there is redistribution and alteration of compositions of sodium and calcium channels in peripheral nerves resulting in sensitivity and spontaneous firing of neurons, Neuropathic pain is severe and difficult to treat.

The transmission of the information from pain afferents to secondary neurons in the spinal cord is not a passive process but is dynamic involving excitation, inhibition, and modulation, Neurons in the dorsal horn are subjected to modulation that gates the flow of information to the CNS. Gating occurs at 2 levels:

Pain evoked by activity in the nociceptors can be reduced (modulated) by simultaneous activity in the mechanoreceptor (Aß fibers), This is explained by the gate theory of pain.

Synaptic junctions between the ending of the afferent pain fibers (first-order neuron) and the second-order neurons of the pain pathway, located in the dorsal horn of the spinal cord are considered as a gate through which pain impulses are transmitted into the ascending pain tracts.

The gate theory suggests that non-noxious (cutaneous) input suppresses pain, or “closes the gate” to noxious input, It is based on the fact that collaterals of the large sensory fibers (Aβ) carrying cutaneous sensory input terminate in the dorsal horn and activate inhibitory interneurons, which inhibit the same second-order neuron carrying pain signals.

Cutaneous stimulation by rubbing the skin activates large diameter myelinated afferents (Aβ) associated mechanoreceptors, subsequently increasing inhibitory interneuron activity that closes the gate to noxious input, That’s why many people have learned from practical experience that rubbing or shaking an injured area decreases the pain due to the injury.

Pain control system at the level of the brain

The most effective clinically used drugs for producing temporary analgesia and relief from pain are the opioid family, The brain has a neuronal circuit and endogenous opioid system (endorphins and enkephalins) to modulate pain, These substances act on opioid receptors, High densities of opiate receptors are found in periaqueductal grey (PAG), nucleus raphe magnus, and locus ceruleus which secrete catecholamines.

The higher centers have the ability to block pain at the spinal cord at the level of the second-order neurons, The most important areas which comprise the pain control system are:

From the periaqueductal grey area arise a descending pathway which project to the medulla where it makes excitatory synaptic contact with neurons of the raphe magnus, which in turn send descending pathways to the dorsal horns of the spinal cord to secrete serotonin at their endings, The serotonin causes local cord neurons to secrete enkephalin as well, The enkephalin is believed to cause both presynaptic and postsynaptic inhibition of incoming type C and type Aδ pain fibers as they synapse in the dorsal horns.

Presynaptic actions include a decrease in Ca+2 conductance that results in decreased neurotransmitter release. Postsynaptically, activation of opioid receptors causes an increase in K+ conductance resulting in an IPSP that inhibits the postsynaptic neuron.