The nervous system is highly developed in vertebrates , especially in man , The nervous system and the endocrine glands are working together to control all the functions of human body systems , They receive the information in the form of external & internal stimuli through receptor systems , and then give the proper response .

This is for keeping the human body in a continuous direct communication with his external and internal environment and for keeping the internal conditions of body in an ideal , constant and balanced state ( homeostasis ) .

The nervous system is divided into : 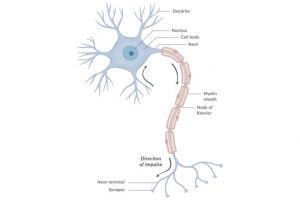 Nerve cell ( Neuron ) is the structural unit of nervous system , Nerve cell is small in size and can’t be recognized by the naked eye , Nerve cell consists of cell body and cell processes .

Cell body of the nerve cell contains rounded nucleus , Cytoplasm surrounded the nucleus and known as neuroplasm which contains neurofilaments , all cell organelles as mitochondria and Golgi bodies , except the centrioles , so , neurons can not divide nissil’s granules .

Cell processes : There are two types of them in the nerve cell , which are :

It is surrounded by two sheaths :

According to the function , nerve cells are classified into three types

In addition to the cell body and the processes of nerve cells , there is another type of cells in the nervous system known as neuroglia .

Another type of cells in the nervous system , have the ability to divide and perform the following functions :

Nerve impulse is the message that is transmitted through the nerves from the sense organs ( receptors ) to the central nervous system , then to the effector ( responding ) organs .

Nature of the nerve impulse :

At rest , there is a difference in distribution and concentration of ions outside and inside the nerve cell , as the following :

The amount of positive ions outside the cell exceeds the negative ions , so , the outer surface of the cell carries positive charges , The unequal distribution of ions results in the presence of an electrical potential difference between outside and inside the cell surface , equals ( -70 millivolt ( m V ) ) .

The state of polarization is a result of :

Therefore , at rest there is an accumulation of positive K+ ions outside the membrane and negative protein ( which can’t pass through the membrane due to its large size ) and chloride ( Cl‾ ) ions inside the membrane , and so the potential difference of cell at rest equals ( – 70 mV ) .

The changes in the nerve cell on stimulation

The nerve cell is stimulated only when the stimulus is sufficient , There are changes in the permeability of membrane in which the inflow of positive sodium ions ( Na+ ) exceed the outflow of potassium ions ( K+ ) through special channels in the membrane .

This leads to the accumulation of excess positive charges inside the membrane , i.e reverse the original polarity , The membrane potential becomes ( + 40 mV ) and this new state is called depolarization , Depolarization is the state of nerve cell on stimulation when its outer surface is negative and the inner surface is positive .

Propagation of the nerve impulse through the nerve fibers

Return of the nerve cell to its original state ( Repolarization )

After the end of depolarization :

Refractory period is the short period of time ( 0.001 : 0.003 seconds ) following the stimulation in which the nerve cell will not respond to any stimulus whatever its strength , During this period the membrane of nerve cell regions its physiological properties ( its ability to selective permeability ) to be ready to respond to new stimulus and transmit another nerve impulse .

Properties of the nerve impulse

All or none law : The stimulation of nerve and muscle obeys the ” all or none ” law , which states that the nerve responds with a maximal strength or with none at all , the sufficient stimulus produces a maximum response ( generation of nerve impulse ) , Any increases in the strength of stimulus will not increase the response , The week stimuli are insufficient to produce an action potential ( nerve impulse ) .

Synapse is the site between the terminal branches ( arborizations ) of axon of one neuron and the dendrites of next neuron .

The ultrastructure of synapse reveals that the synapse consists of :

Chemical transmitter ( Neurotransmitter ) is a chemical substance that has a role in the nerve impulse transmission .

Mechanism of transmitting the nerve impulse across a synapse

This results in depolarization and production of an action potential ( nerve impulse ) , This nerve impulse is propagated through the cell body and moves toward the axon of neuron , then to the next synapse and so on .

After performing its function , acetylcholine ( chemical transmitter ) is destroyed under the effect of an enzyme called cholinesterase to terminate its action , After that , the postsynaptic membrane ( dendrite ) returns to the resting state again .