Cerebral cortex is known as the Cerebral mantle, It is the outer layer of neural tissue of the cerebrum of the brain in humans and other mammals, It is associated with higher-level processes such as consciousness, thought, emotion, reasoning, language, attention, perception, awareness, and memory, and it is the largest site of neural integration in the central nervous system.

The cerebral hemispheres are composed of a convoluted cortex of grey matter overlying the central medullary mass of white matter, The grey matter of the cerebral cortex is approximately 1.5 – 4 mm thick and it has a very extensive surface area provided by the convoluted gyri separated by sulci and fissures.

The white matter of the cerebral hemispheres contains a collection of nerve cell bodies called the basal ganglia. The components that can be identified in a section of the cerebral cortex are:

This arrangement permits diffusion between capillaries and neurons which are very sensitive to changes of oxygen and blood sugar level. 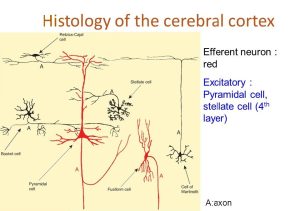 Types of neurons in the cerebral cortex

Cortical neurons vary in their size, shape of their cell bodies and their processes. Two principal nerve cells, the pyramidal, and the stellate cells are identified:

a. Horizontal cells of Cajal: they are small, spindle-shaped, and oriented parallel to the surface. They are found in the most superficial layer where their axons pass laterally to synapse with the dendrites of the pyramidal cells.

b. Granule cells: the name granule cells came from the fact that these cells are small and densely packed giving a granular appearance, They have numerous branching dendrites and a single short axon which may ascend to the cortical surface or descend to the underlying layers, Granule cells are present in all cortical laminae.

In a typical histological section of the motor area, six layers can be identified on the basis of the shape of the predominant cells and fibers. The layers are arranged from surface inwards as follows:

1. The molecular layer (plexiform layer) (I):

2. The external granular layer (II): it contains many granule cells.

3. The external pyramidal cell layer (III): it contains small & medium-sized pyramidal cells which increase in size and decrease in number in the deeper parts of this layer.

5. The internal pyramidal cell layer (ganglionic layer) (V): it contains medium-sized & large-sized pyramidal cells. The most important feature of the motor area is its content of giant pyramidal cells (Betz cells). Betz cells constitute the projection neurons of the motor cortex. They are the upper motor neurons with their axons form the pyramidal tracts descending in the brainstem and spinal cord.

6. The polymorphic layer (multiform layer) (VI): it is the deepest and broadest layer in the cortex. The cells of this layer have variable sizes and shapes (fusiform, triangular, and ovoid).

Cytoarchitecture of some cerebral areas

a. The motor area (precentral gyrus): It is of the agranular cytological type, It has few scattered granule cells, while the pyramidal cell layers are well-developed. Betz cells are found in the internal pyramidal layer.

b. The sensory area (postcentral gyrus): It is of the granular cytological type, The granular layers are well-developed, whereas the pyramidal layers are ill-defined due to the small size and the few number of their pyramidal cells.