Communications between neurons in the central nervous system occur through synapses. A synapse is a specialized functional junction between two neurons. In the nervous system, there are two types of synapses: electrical and chemical synapses.

They are extremely rare in the nervous system. At an electrical synapse, the membranes of the presynaptic and postsynaptic neurons come close together forming areas of fusion called gap junctions. In these junctions, the opposing membranes are held in position by connecting protein channels called connexons, which contain pores that permit ions to pass directly from one cell to the other. This allows rapid direct conduction of electrical potential from one neuron to the next as if no membrane barrier exists.

Almost all synapses in the human central nervous system are chemical synapses. In these synapses, the impulses in the presynaptic axon cause secretion of a chemical transmitter at the synapse, and this transmitter act on receptors located in the membrane of the postsynaptic neuron to modify its activity either exciting or inhibiting it depending upon the nature of the postsynaptic receptors.

Mechanism of neurotransmitter release from a synapse

When an action potential arrives at the synaptic knob, depolarization occurs, which increases the permeability of the knob to Ca2+ through the opening of voltage-gated Ca2+ channels leading to the influx of Ca2+ ions into the synapse. This causes the release of the neurotransmitter by exocytosis proportional to the Ca2+ influx.

The neurotransmitter diffuses through the synaptic cleft and binds to receptor molecules on the postsynaptic membrane leading to the opening of chemical-gated channels for specifications that are allowed to pass the membrane causing a small local change in the membrane potential of the postsynaptic neuron. 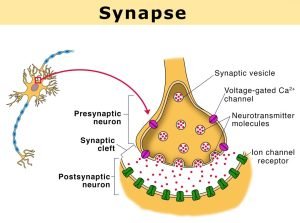 Nature of the postsynaptic change

During rest, the postsynaptic neuron is in the polarized state, showing resting membrane potential (RMP) of about 70-mv. The threshold for its excitation is about 59-mv. The neurotransmitter released at the synapse will lead to either:

The binding of the excitatory transmitter to postsynaptic receptors increases the permeability of the postsynaptic membrane to all ions, but the movement of Na+ predominates due to its large electrochemical gradient across the membrane.

The Na+ influx results in slight depolarization of the postsynaptic neuron, which will increase its excitability and bring it closer to the threshold. This change in voltage above RMP is called excitatory postsynaptic potential (EPSP).

a. Effect of pH

b. Effect of hypoxia

Hypoxia for only a few seconds can result in complete in-excitability of neurons. Loss of consciousness occurs if the cerebral circulation is temporarily interrupted for 3-6 seconds.

Some drugs increase the excitability of neurons and enhance synaptic transmission e.g. caffeine, theophylline, and theobromine (found in coffee, tea, and cocoa) which act by decreasing the threshold for excitation of neurons. Other drugs decrease neuronal excitability and synaptic transmission e.g. hypnotics and anesthetic drugs. decreasing the postsynaptic response.