Ovaries are the female gonads, they secrete hormones, they protect the eggs a female is born with and they release eggs for possible fertilization, The ovary is located within a depression, the ovarian fossa, on the lateral pelvic wall at the level of the anterior superior iliac spine.

The ovary is about the size and shape of an almond (3 length x 2 width x 1 thickness cm), it presents 2 surfaces: medial and lateral. Lateral surface: related to the peritoneum of the lateral pelvic wall and obturator nerves and vessels.

Ligaments of the ovary

Ovarian arteries: It runs through the suspensory ligament and then through mesovarian to reach the ovary.

It accompanies the ovarian vessels to reach the para-aortic LNs at the level of L2. 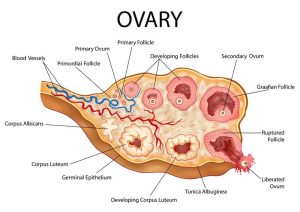 Histological structure of the ovary

Histological structure of the ovary

A section through the whole ovary shows that it is formed of a broad outer cortex, and a smaller inner medulla. The cortex and medulla grade into one another without a clear line of demarcation.

The ovarian cortex: The cortex of the ovary is highly cellular. It contains large numbers of ovarian follicles embedded in the cellular stroma. The cortex is composed of the following:

II. Tunica albuginea: it lies immediately underneath the germinal epithelium. It is formed of condensed collagen fibers oriented parallel to the surface of the ovary.

IV. Ovarian follicles: they are the microenvironment for the development of female germ cells, the oocytes. These are:

In the early embryonic life, the oogonia, female germ cells migrate to the cortex of the developing ovary, proliferate by mitosis and differentiate into large primary oocytes. During the third month of intrauterine life, the primary oocytes enter the first meiotic division and become arrested at the prophase stage throughout childhood till puberty.

Primordial follicles are characterized by the following:

B. The growing follicles

At the age of puberty and under the effect of FSH on the anterior pituitary, a group of the primordial follicles are stimulated to change into growing follicles and the ovarian cycle begins.

The growing follicles include:

They are found in the outer zone of the cortex. As the follicles grow they sink. progressively deeper in the ovarian cortex. The primary oocyte becomes larger and the follicular cells grow into a single layer of cuboidal cells forming the unilaminar primary follicle.

Later on, the follicular cells proliferate to form two or three layers of stratified granulosa cells forming the multilaminar primary follicle, The oocyte becomes separated from the surrounding granulosa cells by a layer of glycoprotein stained with PAS, called the zona pellucida, secreted mainly by the oocyte.

Zona pellucida is traversed by microvilli projecting from the oocyte and granulosa cells via which communicating gap junctions between them occur. The glycoproteins of zona pellucida carry receptors for the fertilizing sperms and can induce the acrosomal reaction, The surrounding stromal cells become densely-packed around the follicle forming a limiting layer called the theca folliculi.

The follicles increase in size, till it reaches about 200 μm in diameter. The granulosa cells proliferate rapidly forming from 6-10 layers around the oocyte. Immediately surrounding the zona pellucida, there is a layer of closely adherent low columnar granulosa cells called the corona radiata.

A clear fluid, the liquor folliculi accumulates in multiple intercellular spaces between the granulosa cells. it contains hyaluronic acid and a high concentration of estrogen. The theca folliculi becomes differentiated into:

It is characterized by the following:

This preovulatory follicle is about 1cm or more in diameter and extends through the full thickness of the ovarian cortex. It can be seen by the naked eye as a transparent vesicle that protrudes against the tunica albuginea of the ovary. As liquor folliculi increases in amount, the spaces unite with each other forming a single crescentic cavity, the follicular antrum.

Atretic follicles occur at any stage of follicular development (pre-and postnatal, till a few years after menopause). During the reproductive life of the women (30-40 years), only one ovum is liberated by the ovaries in each menstrual cycle. So the total number of ova liberated is about 400-450 i.e. not all ovarian follicles will develop to mature Graafian follicles but most of them become atretic follicles.

Atresia is the name for the degenerative process by which oocytes die without having been expelled by ovulation. It involves apoptosis of follicular cells and resorption of oocytes, followed by fibrous tissue formation. After a period depending on the size of the atretic follicle, it dissolves and becomes replaced by the ordinary stromal tissue of the ovary.

Oogenesis and maturation of the primary oocyte:

Just before ovulation the primary oocyte. containing the diploid number of chromosomes (46 d-chromosomes), grows and completes the first meiotic division giving rise to two unequal daughter cells, each cell contains 23 d chromosomes, these are the first polar body and the secondary oocyte.

Immediately after ovulation, the secondary oocyte starts the second meiotic division which will be completed only when fertilization occurs resulting in a mature ovum and the second polar body, each contains haploid chromosomes (23 s-chromosomes).