Sensory receptors are specialized structures that act as both: Detectors and Transducers. Detectors detect changes in the external or internal environment of the body. Transducers convert the energy of the change they have detected into electrical impulses.

According to the type of stimulus, receptors can be classified into:

Mechanoreceptors: respond to mechanical stimuli and include:

Thermoreceptors: stimulated by the thermal form of energy and detect changes in temperature and include. 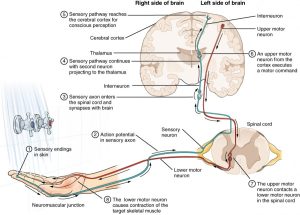 Chemoreceptors are stimulated by the chemical forms of energy: include:

Nociceptors: stimulated by any form of energy potent enough to cause tissue damage.

Some receptors can be stimulated by stimuli other than their adequate stimulus provided the intensity of stimulation is sufficiently high, but will still be giving its own specific modality of sensation.

Differential sensitivity of receptors is illustrated by Muller’s law of specific nerve energies which states that each receptor is most sensitive to one specific type of stimulus called its adequate stimulus giving rise to one type of sensation regardless of the method of stimulation because the sensation perceived depends on the area in the brain ultimately activated.

Properties of the receptor potential

Definition: this is the decrease in the number of nerve impulses in the sensory fiber due to a decline in the amplitude of the receptor potential by a constant maintained stimulus.

Types: according to the rate of adaptation, receptors are divided into:

Mechanisms of adaptation may be due to one or more of the following mechanisms:

This is the ability of the brain to discriminate the modality, locality, and intensity of different stimuli although all sensations reach the brain in the form of nerve impulses.

These are sensations from the skin and deeper structures (muscles, bones, tendons, and joints). According to their nature, somatic sensations are classified into:

A. Mechanoreceptive sensations: resulting from stimulation of mechanoreceptors and include:

B. Thermoreceptive sensations: resulting from stimulation of thermoreceptors and include:

C. Pain sensation: resulting from stimulation of nociceptors. Itch sensations are produced by stimulation of pain receptors due to tissue irritation for example by an insect bite.

2. Pressure sensation: it is the ability to discriminate different weights and generally results from stimulation of tactile receptors in deeper layers of the skin.

Cutaneous thermoreceptors are innervated by small myelinated Aδ and unmyelinated C fibers that travel to the brain together with pain sensation.

Development and Abnormalities of the face, palate, tongue & Nerve supply of face processes