The cerebral cortex is the largest part of the mammalian brain, It is the wrinkly gray outer covering of the cerebrum, It is the outermost layered structure of the brain, It is considered the ultimate control and information-processing center in the brain, It is characterized as being made up of three types of areas: sensory, motor, and association areas.

Physiology of the cerebral cortex

The cerebral cortex is divided into the following main functional areas:

these areas are located in the parietal lobe and include:

Site: this area occupies the postcentral gyrus (Brodmann’s areas 1,2 and 3), It receives fibers from the posteroventral nucleus of the thalamus via sensory radiation. 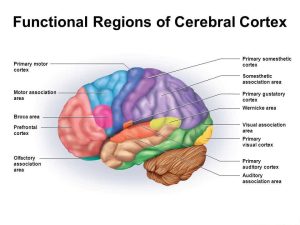 Physiology of the cerebral cortex

The size of the area of representation of different parts of the body is determined by the number of receptors of that part. The cortical areas for sensation from the trunk and back are small, This area shows modality separation of different sensations i.e. the cells of the somatosensory area I are organized functionally into columns with each column is specialized in the perception of a specific modality of sensation.

This area acts as a center for the perception of the following.

Site: this is a small area that lies posterior to the lower end of the postcentral gyrus.

Character: the representation of the different parts of the body in this area is much less sharp than in somatosensory area I.

Lesion: difficulty in learning new features of objects based on shape or texture.

Lesion: damage of this area leads to an inability to recognize objects by touch (astereognosis).

Site: this area occupies the precentral gyrus in the frontal lobe. It contains Betz cells.

Characters: the body representation is roughly the same as that of the primary motor area.

Site: it is a small area that lies anterior and superior to area 6 on the medial surface of the frontal lobe.

Characters: the body representation is bilateral and horizontal. It is less excitable than area 4.

This area receives, analyses, and integrates signals from both motor and sensory cortex as well as from subcortical structures therefore it is considered as one of the cortical integrative areas, It is not involved directly with sensory perception or execution of motor actions.

Functions of the dorsolateral prefrontal cortex

Its storage is very limited; it can hold only a few pieces of information at any one time, Its molecular mechanism relies on the persistent firing of reverberating circuits. Working memory depends on the modulatory transmitter dopamine, (patients with disturbances in the dopamine system have problems with working memory).

Language areas are located in the categorical or dominant hemisphere (the left hemisphere around the Sylvian fissure in right-handed people). However, language production requires the integration of both language and non-language areas.

A. The non-language areas important for language production

For the spoken words, the integrity of the following areas is required:

For the written words, the integrity of the following areas is required:

After the interpretation of auditory or visually presented words, the word meanings are fed into a large area present in the posterior part of the superior temporal gyrus, the Wernicke’s area.

It is present in the posterior part of the auditory association area (area 22 on the left hemisphere) in the superior temporal gyrus. The main function of this area is the analysis of sounds (associating sound with concept) for comprehension of words both spoken and written.

The lesion in this area results in difficulty in understanding language both spoken and written with impaired comprehension of sentences spoken by others. Speech production is effortless, at a normal rate, fluent well articulated. However, it cannot be understood with frequent errors in the choice of words.

This area is composed mainly of two distinct regions:

It is important for language production and grammar, it projects to the motor cortex (area 4) which initiates the necessary muscle movements via the pyramidal tracts, Broca’s area is divided into two areas:

The lesion in Broca’s area: results in speech that is slow, difficult to produce with effort, articulation is impaired. Comprehension is largely preserved for single words and grammatically simple sentences. Patients seem to comprehend (but cannot comprehend grammatically complex sentences due to defects in grammatical processing).