Vas deferens is a thick-walled cord-like duct, it has a very narrow lumen. It is 30-45cm in length. Beginning: at the lower end of the tail of the epididymis. It ascends along the posterior border of the testis, medial to the epididymis. It runs up in the posterior part of the spermatic cord, where it is surrounded by the pampiniform venous plexus.

Vas deferens enters the inguinal canal, within the spermatic cord. It enters the pelvis by passing through the deep inguinal ring, here it curves lateral to the inferior epigastric artery. It descends along the lateral pelvic wall crossing obturator vessels and nerves, obliterated umbilical artery, and external iliac vessels. Close to the base of the urinary bladder, it crosses the front of the terminal part of the ureter.

In histological section: Vas deferens has irregular lumen with longitudinal folds, The wall is formed of 3 concentric coats:

The function of vas deferens: the musculosa produces strong peristaltic contractions during ejaculation, which rapidly move sperms from the epididymis along the vas into the ejaculatory duct. 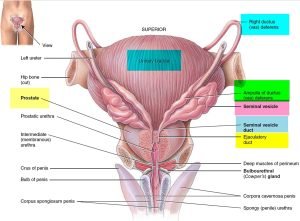 In histological sections, vas deferens is seen together with other structures forming the coverings and contents of the spermatic cord.

Site: Spermatic cord is formed at the deep inguinal ring and passes through the inguinal canal to enter the scrotum, where it is attached to the testis.

Rarely, malignant disease of the left kidney extends along the renal vein and blocks the exit of the testicular vein A rapidly developing left-sided varicocele should therefore always lead one to examine the left kidney.

There are 2 large, sacculated pouches about 5 cm long. It contains a tubule 15 cm long.

In the histological section: the seminal vesicle appears formed of a number of cut sections with isolated lumina. The wall consists of 3 layers.

Functions of the seminal vesicle

It is lined by columnar epithelium and then by transitional epithelium as it opens into the prostatic urethra. The ejaculatory duct does not have musculosa in its wall. Ejaculatory ducts mix sperms with seminal fluid and then deliver semen to the urethra where prostatic secretion is added.