Antidiuretic Hormone and Oxytocin Hormone are synthesized in the hypothalamus and stored in the posterior pituitary gland.

A) On the kidneys:

ADH increases the reabsorption of water by the kidney, These reduce the excretion of water from the body, The urine becomes concentrated and its volume is reduced (antidiuretic effect), It acts on the distal portions of nephrons (in the collecting duct and collecting tubules), increasing their permeability to water, ADH causes the opening of many protein water channels.

B) On the Blood vessels

The effect of ADH on the kidney has more physiologic importance, Under normal conditions, vasopressin is the primary endocrine factor that regulates urinary H2O loss and overall H2O balance, In contrast, typical levels of vasopressin play only a minor role in regulating blood pressure by means of the hormone’s pressor effect. 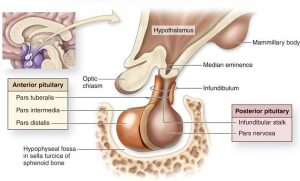 The release of ADH is controlled by a feedback mechanism that acts to maintain the plasma osmolality close to 290 mOsm/L. When the osmolality of the plasma is increased (as in dehydration or high salt level) the rate of discharge of vasopressin from the posterior pituitary increases leading to water retention by its action on the kidney.

The change in osmolality is sensed by osmoreceptor cells present in the hypothalamus which transmit signals to cell secreting ADH (supraoptic and paraventricular nuclei). Plasma osmolality changes of as little as 1-2% are detected by hypothalamic osmoreceptors.

A decrease in circulatory volume and mean arterial pressure will increase ADH. They are sensed by low-pressure receptors in the vascular system which are the primary mediates of volume effect on ADH secretion (in the atria, pulmonary vessels, great veins).In hemorrhage, ADH is secreted in large amounts. It promotes water conservation to reestablish the circulatory volume and causes vasoconstriction to maintain blood pressure.

The functions of oxytocin are not definitely known. It has been suggested that it causes a discharge of sperms from the seminiferous tubules and epididymis to the vas deferens.